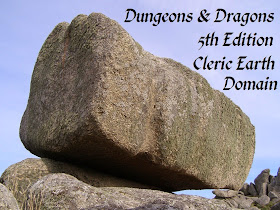 I have been tinkering on some Cleric Domains for 5th Edition Dungeons & Dragons in my spare time and I started to put them up on my YouTube channel recently.  I have links to all of the PDFs in the video descriptions but I'll put them down below as well.  You can find them all in this video playlist:

It was mentioned to me that it might be good to post the text up of the various Domains in one place and so that is what I will do.  This will be the first such post and as I come up with more of them I'll post them up as well.  I hope that you enjoy them.  If you find anything too powerful or too weak or too weird I hope that you tweak them to your own preferences.


1st Level – You can turn Earth creatures with your Turn Undead ability.

1st Level – You gain a proficiency with all ranged weapons.

2nd Level – Channel Divinity: Winds of Wrath – Use this ability to get maximum damage on ranged weapon attacks for 1 minute.

6th Level – You can speak with all forms of flying creatures and monsters.

8th Level – Divine Strike. This is the same as all of the other Divine Strike abilities except you can only use it on ranged weapon attacks and it deals piercing damage.

17th Level – Winged Shapechanger. This is the same as the Wizard Transmutation ability found on page 119 but you can only turn into flying creatures of challenge rating 3 or lower.

Necromantic Blessing – At first level your character can choose any Necromancy spell and prepare it as a Cleric spell.

Death Can Wait – At first level your character gains Advantage on all Death Saving Throws.

Death Ritual – At 6th level your character can cast any Necromancy spell as a ritual even if it doesn't have the ritual tag.

Death's Touch – At 8th level your character can touch a dying target and they automatically fail a Death Saving Throw. You also have Resistance to Necrotic damage.

Avatar of Death – At 17th level you have the “Command Undead” ability of a Wizard who is a Necromancer (page 119 D&D 5E PHB). Also when using your Death's Touch ability any target that dies while you are touching them cannot be resurrected or reincarnated. They can however be raised as Undead.

*Spell's description is modified so that the arms are made from stone and dirt and they deal bludgeoning damage instead.

2nd Level – Channel Divinity: Fellowship of Stone – This ability lasts for 1 minute. A number of small stones equal to your Clerical level will roll towards you or fly towards your enemies. Their attack bonus is equal to your own. This ability does not work if there are no stones present in the surrounding area. Each stone deals 1D8 bludgeoning damage. (I got this idea from the movie Labyrinth). :)

6th Level – Hibernation of Earth – You and up to 10 other creatures must be standing on dirt for this to work. You and the targets will sink down into the ground until you hit bedrock or when you go 10 feet plus a number of feet equal to your Cleric level (whatever comes first). During this time you and the targeted creatures need not breathe and will sleep peacfully. You can do this once per Long Rest. This ability lasts for a number of rounds equal to your Cleric level (or you could have this last 8 hours or some other duration. Ask your DM).

8th Level – Elemental Wrath – You have advantage when attacking Air, Fire, and Water Elementals. Once per Long Rest you can have attacks that target other forms of Elementals deal maximum damage. At 14th level you can use this ability twice per Long Rest.

17th Level – Earth Elemental – Once per Long Rest you can become an Earth or Stone Elemental. This lasts for a number of rounds equal to your Cleric level.

1st Level – Turn Water Creatures. You can use your Turn Undead ability on water creatures.

2nd Level – Channel Divinity: Sculpt Spells. This is the same as the Wizard Evocation ability found on page 117 of the PHB.

8th Level – Burn the Unholy. Any turned Undead (using the Channel Divinity ability) also take 1D6 fire damage per Cleric level on a failed Dexterity saving throw. If they make the save they take no damage. Undead that are destroyed are burned into a pile of ashes.

17th Level – Burning Martyr. Use your action to activate an aura of holy fire that lasts for 1 minute (regardless of whether you are still alive or dead by then). This aura is centered on you and it has a 60 foot radius and it move with you. Your enemies within this radius get disadvantage on Dex saving throws and your allies get advantage. Those that fail the saving throw take 10D6 fire damage and those that fail the saving throw take half damage. They need to make this save every round that they are in the fire and this includes your character. Your character cannot use any magic or item or spell to reduce this damage, and you cannot have another character heal you as the spell continues. The ONLY way that your character can reduce this damage is by a successful saving throw. If your character dies the spell rages on for the duration of the spell. It is up to the GM if this spell is as high as the heavens or in a 60 feet radius sphere.

1st Level – Illusionary Blessing. Targets of your illusion spells have disadvantage on their saving throws.

8th Level – Illusionary Strike. You infuse your weapon attacks with illusionary magic. Targets of your melee attacks think that you are striking in areas that you are not as they see your attack arm in a different location, and thereby they don't get their Dexterity bonus added to their AC. At 14th level they don't gain the benefit from their shield either.

1st Level – You can turn Fire Creatures with your Turn Undead ability.

1st Level – Natural Swimmer. You have proficiency with the Athletics skill and your swim speed is the same as your movement rate.

2nd Level – Channel Divinity: Water Walk. This is the same as the Water Walk spell but the duration is for 1 minute per Cleric level

6th Level – Channel Divinity: Freezing & Melting. By touching the surface of a body of water you can freeze it solid instantly. It remains completely frozen for 1 minute and then it will begin to melt normally or remain frozen if the temperature is below the freezing point. You can also instantly melt ice to water (doing the opposite of the above mentioned stuff). You can freeze or melt 10 cubic feet of water or ice per Cleric level.

8th Level – Blessings of the Dark Depths. You can never drown and at 14th level you don't take damage from deep ocean pressure.

17th Level – Breathe in Vain. A bolt of water vapor springs forth from your hand and flies up to 150 feet to a point of your choosing. Centered on that point there is a 40 feet radius and those found within that radius have their lungs begin to fill with water. They need to make 3 Constitution Saving Throws to expel the water from their lungs or drown. See Drowning Rules for other clarifications.