With a little elbow grease, a pen, and some white sticker paper I doctored up a D&D character sheet that incorporated my house rules as well as some of the optional rules from the DMG. 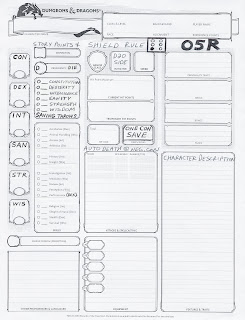 You can download a PDF of this here (if you would care to).
https://drive.google.com/file/d/0B5q-SrbFhJetT1l6QmZPT29NSWc/view?usp=sharing

I talked about most of the optional and house rules that I'm going to use here:
https://www.youtube.com/watch?v=xaFWNggKkVE

"O5R" is a combination of some of the ideas from the old school renaissance (OSR) and 5th Edition D&D.  See below for more information and for some links.

Step 1.  Determine Ability Scores via 4D6 drop the lowest straight down the line.  Start at the first stat, roll, and then record the total for that stat.  Page 13, and 173 in the PHB).

Step 4.  Choose a Class.  Page 11, and 45 in the PHB.  The Classes will be limited to the Cleric, the Fighter, the Ranger, the Rogue, and the Wizard (the "Big Four" plus the Ranger in other words).  The Cleric and Rogue will be modified to show the rules changes found below.

1.  Remove Charisma and all of the associated skills that go along with it.  Players will engage in role-playing without any social mechanics.  Those skills that are listed in Classes and Backgrounds will be replaced with other skills.  Spell descriptions that call for a Charisma saving throw will instead be a Sanity saving throw (see below).

2.  Add a Sanity stat, with one skill under it called Mental Stability.  This new skill will be one of the ones that replace some of the social skills that I removed in the class descriptions.  Seem DMG page 258 and 264 for details on Sanity and Madness.

3.  Instead of a static Proficiency Bonus I am going to use the more random Proficiency Dice optional rule found on page 263 of the DMG.

5.  Inspiration can also be spent like Plot/Story Points which is an optional rule found in the DMG on page 268.  I am going to use Option 1 and Option 2.  Option 3 is more for GMless games.

12.  No Opportunity Attacks.  They are listed in the PHB on page 190, and 195.  Reactions to spells and class features still happen as normal.

13.  Instant Death happens at negative constitution instead of a negative maximum total of hit points.  PHB 197.  Make one single Death Saving Throw with Con modifier as a bonus.

14.  Traps don't always go off, and they will fail a certain percentage of the time.  I still need to figure out how often they should fail.

15.  Spellcasters will need to announce BEFORE initiative is rolled if they will be casting a spell or not (remember that I will be using Side Initiative).  This is to show how obvious it is with they waving their hands all over the place and muttering dark words that a spell is close to being cast so that they can be targeted by the enemy.  If a spellcaster takes one hit point of damage before it is cast (before their initiative) the spell fizzles and it will not be cast that turn.  They do not lose any spell slots however.

16.  Shields can block successful attacks a percentage of the time.  This will be a roll of the dice, but I'm not sure which die to use for this yet however.  If the roll is successful then the attack is blocked entirely.  This makes shields more important and I just like the way it feels in play.  This rule is from the game Dragon Warriors.


Posted by SamwiseSevenRPG at 11:45 PM