D is for Durritlámish (Empire of the Petal Throne / Tékumel) #AtoZChallenge2021 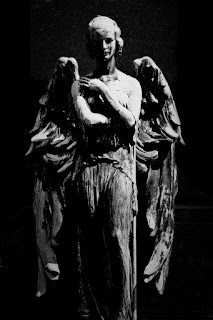 D is for Durritlámish, the Black Angel of the Putrescent Hand, He of the Rotted Face, Opener of Catacombs, and Cohort of Sárku. He is often depicted as a rotted corpse seated upon a throne of broken bones, and holding a bowl from which smoke issues forth. It is said that the cohort can view all of the life-skeins of the creatures in the universe. He aids those who deal with the undead, and aid the creatures of the underworld.

I ran a few sessions of Empire of the Petal Throne at my local gaming club, and all of the player characters were devoted to Sárku or his cohort Durritlámish. In the end all of them became Jájgi (intelligent undead) as a reward for their service to both of their temples. They had to go down into the depths of the underworld to recover various artifacts devoted to their gods. They had to fend off a few other adventuring parties (also hired by the temples...), as well as a host of other nasty monstrosities, and even a metal humanoid that time had forgotten. Good times. 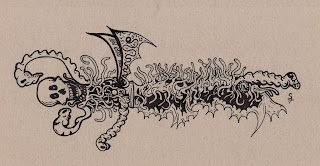 Clothing of Priests & Worshipers: Brown and purple robes, brown lacquered armor, and they paint their faces like corpses.

Colors of the God: Black, Brown, and Purple.

Holy Symbol: A stylized Vessel of the Vision of the World.

For more information on the goddess see Mitlanyál Volume 2: The Gods of Stability by Robert Alberti and M.A.R. Barker.

Posted by SamwiseSevenRPG at 7:36 PM