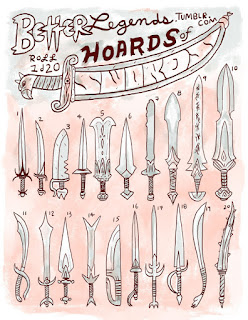 I don't know why I can't be this creative with my own motivation.  I seem to work best when someone tells me to do something and then I get to work in answering it in my own strange way.  I guess I just need creative direction.

Anyway, without further ado, here is the list that others and myself came up with.  I edited them all a bit to my own liking.

1. Heartstrings.  The blade is a normal blade (not even that finely crafted) but the handle of the sword is made from wrapped dragon heartstrings. Those that wield the blade can cast one random spell per day, and they can more easily resist the spell-like effects of dragons, lizardfolk, and any other scaly foe.

2. Hangman's Toothpick.  This sword mysteriously clattered on the ground beneath an unarmed man that was hanged for unspecified "crimes against the crown." The blade is cold to the touch. If this sword is attacking a creature they will hear whispers all around them, distracting them and making them easier to hit.

3. The Grieving Butcher. This sword feels more like a meat cleaver when wielded. It grants a large attack bonus vs. stationary targets. The sword is said to have been created by a widowed meat merchant.

4. Eye Bane. On a critical roll the target of the blade will be permanently blinded unless they make a saving throw.

5. Sacrificial Blade of the Water Priestesses. Those killed by this blade have their bodies turned quickly into pools of churning water that evaporate after 1D6 minutes.

6. The Wayward Gem.  This blade is said to have belonged to the Heathrowe family.  The gem of the sword falls off during a battle and teleports itself to random locations.  The wielder of the blade can then also teleport to the gem's location along with anyone else that is touching them.

7. The Paddle Sword. This roughly worked sword changes into a paddle when it touches water (or at the wrong time when it is raining, or someone spits on it).

8. Sword of the Shattered Bone. On a successful hit one random bone will break cleanly inside the victim (if they fail a saving throw).

9. Death of Stars.  This sword is rumored to have fallen out of the hand of a dying "Star Childe." Before it died it wrote the strange sigils on the blade with its elongated finger and blew on it with its final breath. Any creature slain by this sword is temporarily possessed (for 1D6 rounds) by the sword's original owner and it spouts off wisdom in a strange unknown tongue (something like a Comprehend Languages spell will be needed to decipher it).

10. Heavy-hearted.  This blade has an enchantment on it that makes it weigh the same as a large warhorse unless the wielder is from the _________ race/species (something in your setting of choice). Most people cannot pick it up or move it.

11. The Serpent's Kiss. When a critical is rolled on an attack a living irate snake is implanted in the target's intestines.

12. Axeblade.  This is a normal sword, though it can act more like an axe for chopping down trees. The handle also unscrews to reveal a secret compartment in the handle.

13. Pyramid Key.  Once per day this sword summons a stone pyramid shelter.  The sword is the key to open and to lock it.

14. Lost Sword of Halves. This sword has never killed a single soul and it never will though it does wound. It reduces the Hit Points of the victim in half with every successful hit (round up to the nearest whole number).

15. Sword of Self-Decapitation. Upon her death bed, a woman pulled this strange brand from beneath the covers. With a command word the sword decapitated her violently by itself. The sword is of fine craftsmanship, but it holds no other abilities.

16. Bloodspitter.  This sword has a mechanical lever that when pushed forward sucks blood from a body. This lever can also be reversed to spray blood out of a small hole at the top of the sword. Other liquids can be held in the sword, but it will begin to shake violently after any other liquids are contained it after 1D6 hours.

17. The Smoldering Ruin. Small flames can be lit on the cross-guard and they will stay lit for 1D6 hours. These flames stay lit even when the sword is being used violently in combat. If a 1 is ever rolled during an attack the wielder of the blade must roll a saving throw or one of their appendages will burst into flames and turn instantly into ashes. The blade hates magic-users and grants the wielder a bonus when attacking them.

18. Carnival Bone. This strange sword heals undead creatures when it stabs them and does not deal any damage whatsoever to living creatures (it turns ethereal and passes right through them). It is said that the sword was used in a traveling carnival.

19. Time Blades.  Reclusive, pacifistic elves live for generations isolated from the violence of their former lands. When raiders find and start targeting these elves, swords were made having only dusty scrolls and hearth-fire stories to go on. The result were 10 matching blades that seemed to slice through time itself. Whenever the wielder uses the sword in a purely defensive maneuver, adjust the player's initiative score in a positive way.  Also, on a natural 20 the wielder of the sword can choose to return to a point right before the fight to avoid all bloodshed.

20. Thornblade.  These wooden weapons are sentient swords grown by a sect of reclusive druids in remote part of the world.  When wielded by a ranger or druid (or other nature-based character), the blade deals damage as a metal longsword.  On a critical hit the target of the sword will sprout 1D6 trees upon their death that will grow quickly out from their flesh.  For other non-nature affiliated characters, the blade deals damage as a shortsword and wounds the wielder on a fumble or natural 1.  The thornblade will lose its shape and lose its abilities if not bathed water regularly.