This was designed for D20 type games. I bet it would work well in a sci-fi game where energy weapons such as blasters and laser swords are present. Powerful artifact / magic weapons might use it as well.

It might be good to only use this when players roll a critical hit. Perhaps a nasty Big Bad antagonist could use them as well. It's REALLY deadly if you roll doubles...

To roll a D66 it is best to use two different color dice (2D6) and designate which is the 10s column and which is the 1s column. For example if you had a Red die for the 10s and a Blue dice for the 1s and you rolled Red 5, Blue 6, then the result would be 56.

Note: I created this in a blurry haze of sleep deprivation and "tired tears." Yawwwnnn. 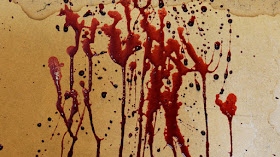 Optional Rule I: in addition to the regular damage sustained above, the target of the critical hit also bleeds an amount of damage equal to the 1s column. For example, a roll of 64 would mean they are bleeding 4 hit points per round until the wound is tended to, wrapped in a bandage, or magically healed.

Optional Rule II: in addition to the regular damage sustained above, the target of the critical hit also has to deal with another complication based on the 10s column.

1. Target is knocked Unconscious no matter how many hit points they have remaining.

2. Target falls flat on their back. They are Prone, but they can make attacks or defend themselves with a penalty.

3. Target must make a Saving Throw / Dexterity Stat Check / etc. or they break a bone of the DM/GM's choosing.

4. One piece of armor/clothing, an item, a shield, or weapon is utterly destroyed.

5. Target falls flat on their face. They are prone, and cannot attack or perform any actions other than composing themselves and standing up (if they are able to). This might be a round of Stun in your system of choice.