The spells listed below are the first level magic-user spells from the Lamentations of the Flame Princess core rule book but they have been reworked, and modified. Let me know what you think of them. The original spell names are listed in parentheses after the new spell names that I have provided. 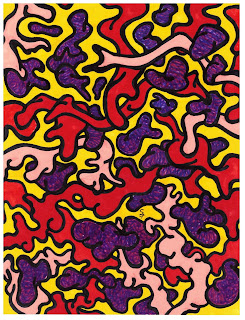 3. Devouring the Walls of Self (Charm Person)

4. Drink Knowledge from the Damned (Identify)

This spell allows the caster to feel if anything within a 30' radius (or on his person) is in any way magical. Their skin crawls, tingles, or feels like some being from beyond the confines of the world is running their finger across their skin. They have a rough guess as to where the sources of these magical emanations are coming from to a 5' square area. This includes magical creatures, magical items, or any creature or object under the effect of an ongoing spell. Spellcasters such as Magic-Users and Elves do not detect as magic with this spell, but anyone that is under the effects of an active spell does. The spell does not identify the nature of the magic, only that magic is present.

Magic-User Level 1
Duration: See Below
Range: 10' / level
Optional Requirement: Caster has to bite his own tongue and then spit blood in the air above them.

The affected creatures grow magical wings made from crusty blood and fall slowly. This spell instantly changes the rate at which the targets fall to about 5' per Round, and the subjects take no damage upon landing while the spell is in effect. The spell ends in 1 day or when the caster reaches somewhere to land whichever cones first.

The spell can affect one or more creatures, including gear and carried objects up to each creature’s maximum encumbrance. The maximum weight of 200 pounds + 200 pounds per level can be affected, such that a 1st level Magic-User can affect 400 pounds.

DEVOURING THE WALLS OF SELF (CHARM PERSON)

Magic-User Level 1
Duration: See Below
Range: 120'
Optional Requirement: Devouring a few strands of hair, drinking blood, or eating flesh of the spell's target. When the spell ends the caster will vomit out what was ingested.

This spell makes a single subject utterly enamored with the caster and desperate to
please him if the saving throw versus Magic is failed. This is not mind control, as the subject retains his personality and controls how he acts but for his utter fascination with the caster. The caster must articulate his desires if he expects the subject to fulfill them.

This spell works on all humans and human-like creatures (except Elves); other (non player character class) humanoids are not affected if they have more than four Hit Dice. Abuse or neglect of the subject will trigger another saving throw to negate the Charm, and murderous violence towards the subject also triggers a save, but with a +5 bonus to the roll. The subject, if intelligent, will realize that he has been victim to mesmerism, and retain full memory of his actions while under the spell after the spell ends.

DRINK KNOWLEDGE FROM THE DAMNED (IDENTIFY)

Magic-User Level 1
Duration: Instantaneous
Range: Touch
Optional Requirement: Drinking an alcoholic herbal mixture (100sp) from a skull dug up from a cemetery that has never been used for a spell previously.

Magic-User Level 1
Duration: 6 Turns
Range: 20'
Optional Requirement: A bone from a cemetery grave that needs to be broken/destroyed.

The caster summons the decrepit body of a corpse that has died within a number of years equal to the caster's level. The corpse floats and follows the magic-user about and carries a heavy load for him. The corpse can lie flat or use its limbs to hold things. It can hold 500 pounds. The corpse floats approximately 3 feet above the ground at all times. It floats along within spell range and will accompany the caster with an equal movement rate. If not otherwise directed, it maintains a constant interval of 6' between itself and the caster, and will follow the caster without prompting to maintain a minimum of 6' distance. When the corpse winks out at the end of the spell’s duration, whatever it was supporting or holding falls to the surface beneath it.

The caster can understand the spoken words of creatures or read otherwise incomprehensible written messages by summoning extraplanar worms directly into his ear canals to translate for him. The creature or the writing must be touched by the caster before the worms can deliver any translation. The ability to read does not necessarily impart insight into the material, merely its literal meaning. The spell enables the caster to understand or read an unknown language, not write it. It is up to the referee if the player character can repeat the words uttered in his ear correctly or not.

This spell summons extraplanar hands from some Hellish plane of existence to magically hold shut a door, gate, window, or shutter of wood, metal, or stone. The hands affect the portal just as if it were securely closed and normally locked. A Knock spell or a successful Dispel Magic spell can negate this spell.

When the subject of this spell touches a book, it violently animates, forming a quivering mouth around the edge where the paper shows. The subject can ask the book one question per Round, and if the information is contained within the book, it will answer by screaming the words in a guttural voice. If anyone else approaches or asks questions the book instead growls, snaps, and will attack them for one Round. It has a +2 bonus to bite and deals 1D4 damage. Intelligent books can save to resist the spell (as a Magic-User of a level equal to the author). Magical books do not impart their effect when they answer and if they attack they deal 1D6 damage. The spell is a shortcut to actually reading a book, and it will not give more information than a careful reading would.

The forces of magic do not recognize the relationships of size and distance between things; it is the limitations of the mind’s ability to master magic that results in strictures such as “spell range,” but sometimes the infinite nature of magic can be applied to material objects. This spell causes instant painful (1D4 damage) growth (and corresponding increase in weight and damage done) of a single object or creature that is in visible range. This increase changes a creature’s size by 20% per caster level, up to three times the original size of the creature. The effectiveness of this spell is half of this on non-living objects, which are only enlarged 10% per level and to a maximum of double the original size of the object. The caster can affect a 10' cube of living matter per level.

Magical item properties are not affected by this spell. For instance, a wand will have the same function even though it is increased to the size of a staff, and potion dosages are not increased, though they may take longer to drink. A person enlarged will have a strength appropriate to his size (as an ogre or a giant, for example) with corresponding strength adjustments.

The damage done by an enlarged character during mêlée is increased by the same percentage as his size.

The reverse of this spell, can creatures in size by the same proportions as Enlarge. These spells cancel each other out. For either version of the spell a saving throw versus Magic is allowed to negate the effect. This save can be forfeited if the recipient desires. This reversed version also deals 1D4 damage to the target.

Magic-User Level 1
Duration: 2 Rounds/level
Range: 80'
Optional Requirement: A fistful of dust collected from a shrine to St. Elmo (or similar saint/deity) must be tossed in the air.

A pale electric glow begins to be emitted by the target's skin, making them hypervisible. This shed light makes them visible in darkness at a distance of 80', or half this if the creatures are near a light source. The Magic-User can affect creatures within a 40' radius, and may affect up to one human-sized creature per caster level. The spell's light can be any color according to the Magic-User’s choice at the time of casting. The electric glow does not cause any harm to the objects or creatures thus outlined, but it is similar to the effects of static electricity. However, their greater visibility grants attackers a +2 bonus to hit them while the spell is in effect.

Here are some other blog posts about LotFP spells:

Posted by SamwiseSevenRPG at 9:24 PM