THESE INDUSTRIOUS FOLK CAN FIND FOOD IN THE STRANGEST OF PLACES. Even in the depths of the earth, buried in a refuse pile, behind an old grave, or under a corpse... Wayward scroungers or "gutter cooks" have a knack of finding edible food that others would never eat. They know ancient techniques on how to prepare such normally disgusting food in ways that won't make their compatriots vomit violently. It might not taste like the soup at the local inn but it will keep the characters alive to see another day. They might WANT to die after eating these prepared meals however...

These vagabonds rarely stay in any one place for long. Their wanderlust serves them well as adventurers for hire. They tend to take assignments that will introduce them to new places and bygone backwater towns few have ever heard of. They often collect new recipes and cooking techniques from new cultures in recipe books. 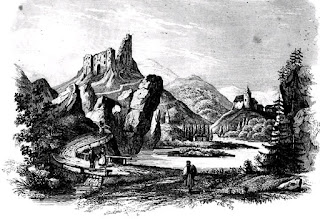 With the use of ancient lore passed down from parent to child gutter cooks have tricked herbs to grow right on their own skin in small patches. They begin play with 1D4 herb patches on their skin from the random table below. Each patch has 1D6 doses of herb that regrow in one week once harvested. They can grow one additional patch on their skin at each new character level (roll randomly for the type of herb that grows in the new patch).

Those who eat food that a Gutter Cook prepares have a +2 bonus to any saving throw rolled that day vs. anything they eat. The food they prepare is treated as if a Purify Food & Drink spell was cast on it. These improvisational cooks can also deal +1 extra damage per character level to all forms of fungi and plants with a successful attack. They get +1 to all dice rolls (attack, damage, etc.) when they are hunting or gathering/scrounging for food.

Wayward scroungers are at home in natural areas and start with a 2 in 6 chance to use Bushcraft. They can track creatures in the wilderness with a base 5 in 6 chance and in dungeon environments with a 3 in 6 chance. This chance is reduced by 1 for each day that has passed since the creature left its mark there. It is also reduced by one for each hour of rain since the creature passed that way in wilderness areas. Obvious trails left by bleeding creatures, herds of animals, or large groups of people should automatically be successful.

Thanks go to Dyson Logos for finding the public domain image that I used in this post.

Thanks go to Dyson Logos for posting the public domain image I used.

Posted by SamwiseSevenRPG at 2:27 PM