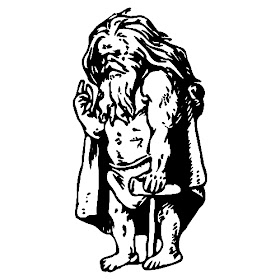 THE DWARVEN PEOPLE STRUGGLE AGAINST THEIR ENEMIES WITH NO HOPE. They expect to die off before the end of the world due to their culture's gloomy prophecies. They continue to fight because it would seem strange for them to do otherwise. Stubbornly they refuse to quit.
Dwarven sappers have often been the difference between defeat and victory on the battlefield. They bring outer city walls down, dig beneath defensive structures, set up earthen pit trap ambushes, and find secret ways into places that others could never find.
Sappers often sign up with foreign armies, sell their skills as mercenaries, or aid risky subterranean adventures. They are often eccentric, quirky, and slightly odd as a general rule. They use normal Dwarf saving throw numbers except for Breath which uses the better Halfling numbers. They have 1D8 hit dice.
These dwarves sometimes get vertigo when they are above ground. When on the surface any time a natural 1 is rolled on a D20 they are affected by vertigo for 1D6 rounds and suffer a -2 penalty to all dice rolls. When beneath the ground ignore this flaw.
Dwarven sappers start with the following 2 in 6 skills: Architecture, Climb, Search, and Tinker and they increase at higher levels. The can excavate at twice the normal rate (LotFP page 33). They often join causes to thwart their enemies. They recieve +1 to attack and damage rolls vs. one type of "enemy." They are also only surprised on 1 in 6 (due to their heightened paranoid senses).
Note: This class does NOT use the fighter special combat moves, recieves no Con modifier bonus, and gets no encumbrance advantage as per the normal Dwarf class.

*NPCs only, all Player Characters begin at Level 1.
Optional: Sappers can create simple black powder mining charges that are similar to the fire bomb information found in the LotFP firearms section. They are designed to deal damage to structures but they deal 2D8 damage to everything in a 15' radius (half damage with a successful Breath saving throw).
The art is public domain.
SamwiseSevenRPG at 3:55 PM
Share