This table was put together with the help of a bunch of people on Google+ and in the RPG Brigade.  Thanks for all the help.  I hope to use this list in my next sci-fantasy RPG campaign.  Enjoy.

The People of Pembrooktonshire - Resources (Lamentations of the Flame Princess) 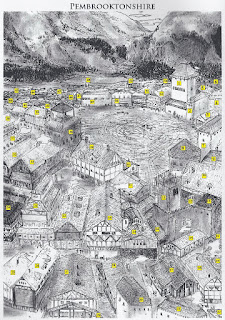 I ran a campaign where the player characters started out in the messed up town of Pembrooktonshire.  I believe that we spent about 17 sessions in that horrible place but I would have loved to have played more sessions there.  A great time was had by all, but eventually reason took over and they wanted to get out of Dodge.

Here are some resources that I used while running the game that might be useful for a LotFP GM.

Here is my actual play of my campaign where I used The People of Pembrooktonshire if you want to listen in.
https://www.youtube.com/playlist?list=PL5NHK6rtYgB3K-rjyXoPAPT9EUrr1kaH5

18. Up In Smoke - Tobacconist (Herbert Dooley)

The Random Events and NPCs:


Posted by SamwiseSevenRPG at 8:33 AM 4 comments: 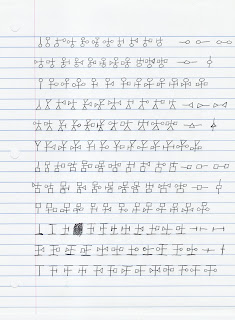 If you were to start tearing up my gaming room you would find reams of paper that have this kind of doodling on it.  I'm not sure why but from time to time I just feel an overwhelming urge to try to make a new series of symbols that could be some fantasy alphabet.  There are way more symbols here than are needed to duplicate the English alphabet which I find intriguing.  I want to add in strange letter combinations.  Even if you just use 1/4th of the symbols above you can have plenty of extra symbols to represent CH, TH, ST, NG, etc.  It is kind of amazing that I could come up with so many different symbols from just using lines, circles, triangles, and squares.

I think the simplest symbols would represent the vowels or the most common letters used in whatever language they come to represent on the written page.  I left blanks if you want to go into an image editing program to type in your own letters.  I'm not entirely happy with the letters I associated with each letter symbol yet or I would post that up too.

I messed up on one of the letters in the image.  hehe.

What are some fantasy or sci-fi alphabets that you use or have come up with on your own?

Posted by SamwiseSevenRPG at 12:36 PM No comments:

One Hundred Ways to Die in a Fantasy Setting

This table was heavily inspired by the Lost Souls RPG death tables.  It is a game about ghosts. http://www.hauntedattic.org/lostsouls.html

I'm going to be running a play by post game about ghosts that mashes together various rules from several different games but I'm going to be using a fantasy setting as the backdrop instead of the standard modern ghost setting.  I'll be throwing in setting elements from: the Mad City from Don't Rest Your Head, the world of Little Fears, and The Shadowlands of Wraith: the Oblivion.  It should be fun.

No more blah, blah, blah, here is the table.  Some of them are a little silly, but not overly so.

D100 Fantasy Deaths
Cause of Death
1. Died of a heart attack while vehemently defending your ideas.
2. Dropped dead of excitement.
3. Touched glowing, green ooze seeping from strange meteor.
4. Swallowed unknown elixir “to see what would happen.”
5. Suffocated while exploring mysterious cave.
6. Horse / Transportation accident.
7. Published rival's book under own name and then murdered by them.
8. Translated ancient parchment aloud while standing in front of a grave.  Strangled by an unknown party.
9. Murdered by an old friend with a mental illness.
10. Accidentally summoned a “Creature from Beyond.”
11. Tripped while ascending stairs.
12. Jumped from a high place and failed to land where you wanted to.  SPLAT!
13. Accidentally stabbed self while carving or butchering something.
14. Tripped (or were pushed) into a vat of some liquid, drowned.
15. Gargoyle (or some other statue) fell on head.
16. Died while attending a play or while listening to a story.
17. Metal or stone structure collapsed on you.
18. Murdered by a mad artist who used your body for his "art."
19. Drowned while swimming too far from shore.
20. Spouse wanted you dead, and had her brother do it.
21. Died in a dungeon for a crime you didn't commit.
22. Buried in sand, suffocated.
23. Stomach rupture after too much eating.
24. A dock collapsed and you were drapped under the pilings, drowned.
25. Skull crushed while not wearing a helmet.
26. Beaten to death in a fist-fight.
27. Died of heat exhaustion.
28. Crushed by fans at a jousting/sporting/melee championship event.
29. Hit in the head with a rock.
30. Ambushed from above, broken neck.
31. Choked to death on a bone.
32. Ran over by a horse and wagon.
33. Hit in the head with a rod of iron.
34. Overdosed on drugs/stimulants.
35. Allergic reaction to bee sting (or some other thing).
36. Died while repairing something heavy, crushed to death.
37. Horse was uncontrollable, landed on the ground and died after being dragged to death.
38. Lightning strike.
39. Poison in your wine or ale.
40. Fell down stairs, neck broken.
41. Stabbed to death by a beautiful stranger that you slept with the night before.
42. Gust of wind blew you off of a high place.
43. Died during construction of a new building.
44. Inhaled poison fumes.
45. Burned to death.
46. Ancient tower collapsed with you in it.
47. Drowned in a sewer.
48. Village was attacked, you were stabbed and died slowly surrounded by lots of corpses.
49. Boiled to death as some sort of punishment.
50. Burned to death as a result of a new form of alchemical weapon.
51. Friendly fire during a battle.
52. Starved to death in a forgotten room of a library, when a librarian locked you in.
53. Lord or politician killed you when you threatened to black mail them.
54. Died from eating rotten meat.  Served by a loved one.
55. Accepted a bribe, and was later killed by the one that bribed you.
56. Criminal was offended at your remarks, killed you in your sleep.
57. Killed by a shop owner for stealing stomething.
58. Arrows during a battle.
59. Scavenged for food while hungry and accidently ate poison herbs.
60. Accidently stabbed yourself, wound festered and you died.
61. Drowned in quicksand.
62. Hired to kidnap someone, and when the job was finished they killed you.
63. Killed while trying to release some hostages.
64. Torn apart by wild dogs.
65. Killed a corrupt person of high importance, killed by guards.
66. Stalked and killed by some supernatural murderer.
67. Fell out of a tree while climbing it.
68. Punched by a drunk, cracked skull upon on hard stone floor.
69. Crushed by a rush of people in a crowded area.
70. Mauled by a bear.
71. Murdered by an assassin.
72. Weapon failed you at the last moment, killed by soldier.
73. Refused to take a bribe and killed by corrupt soldiers/guards/etc.
74. Hunted down by a psychopath.
75. Died while saving a great king, lord, vassal, etc.
76. You were bitten by someone or something, and gangrene killed you.
77. Killed by a horrible virus/plaugue.
78. Buried alive while knocked unconcious.
79. Froze to death.
80. Starved to death, locked in room by someone you trusted.
81. You accidentally scarred someones face, and they killed you 10 years later.
82. A tree fell and crushed you during a storm.
83. Exotic pets turned on you.
84. Died of exposure when your clothes were forcibly removed from you.
85. Killed by a collector that wanted something valuable that you possessed.
86. Killed by the followers of a strange cult.
87. Sudden blizzard and ice storm left you stranded in the woods, died of exposure.
88. Left to die by trecherous companions.
89. Bit by a poisonous snake.
90. Angered a powerful host, who had you killed with an axe.
91. Someone thought you were someone else, and beat you to death.
92. Smothered while escaping from prison in a tunnel.
93. Hunting "accident."
94. Never returned after going down the river in a small boat with some "friends."
95. Lost in the woods, ate poisoned berries.
96. Killed by poor peasants, who wanted your shoes/boots.
97. Devoured alive by rats and mice in a torture room.
98. Suicide.
99. Stroke.
100. Killed by a jilted lover.
Posted by SamwiseSevenRPG at 5:16 PM 2 comments: 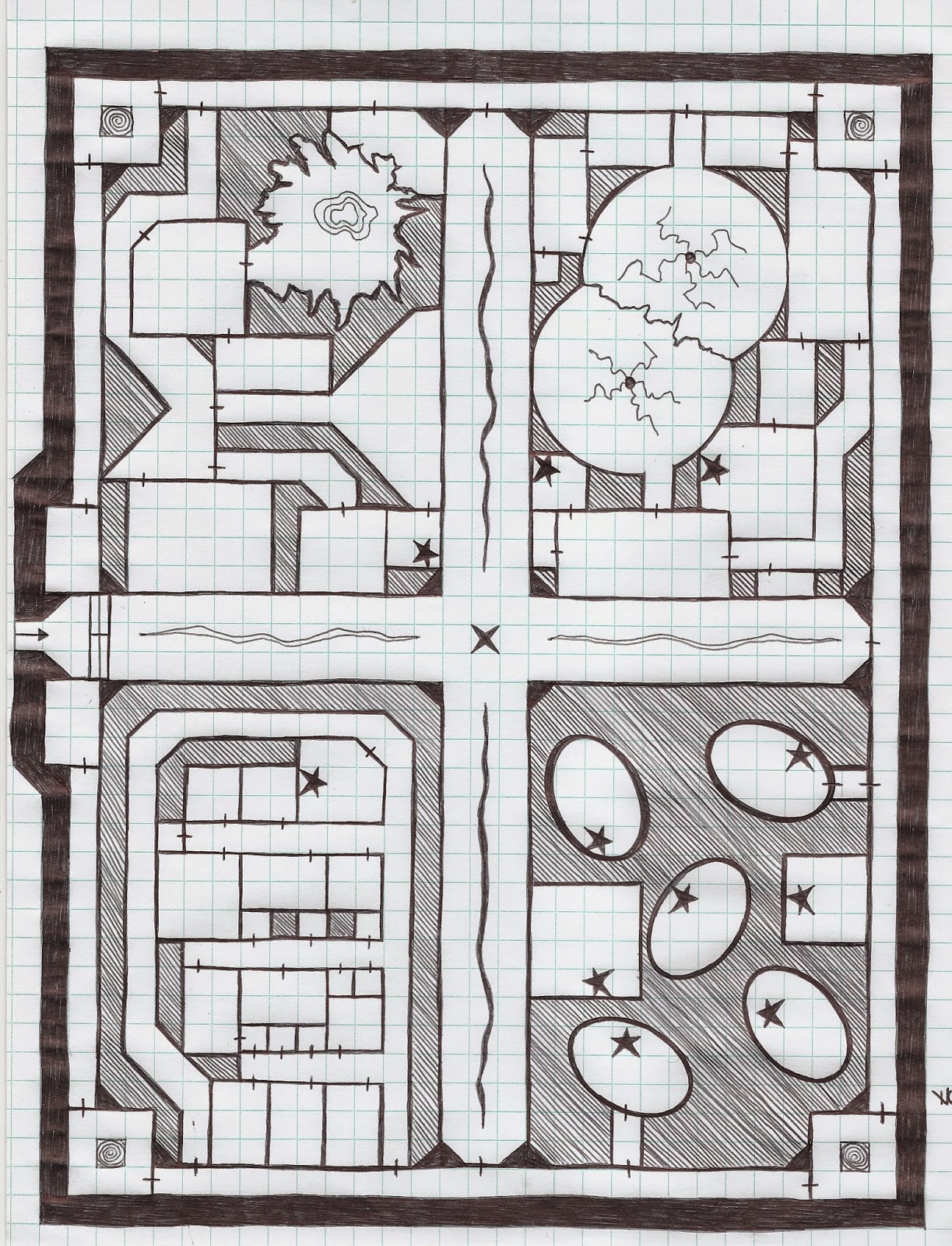 I doodled these up yesterday while I was snowed in at work.  They are for the ruins of Castle Vyn in the Blood Moon Rising Labyrinth Lord module.  The above image is the first level.  There are some black star teleporting symbols.  The rest is left up to interpretation.

I really enjoy just drawing up dungeons with a normal ball point pen. 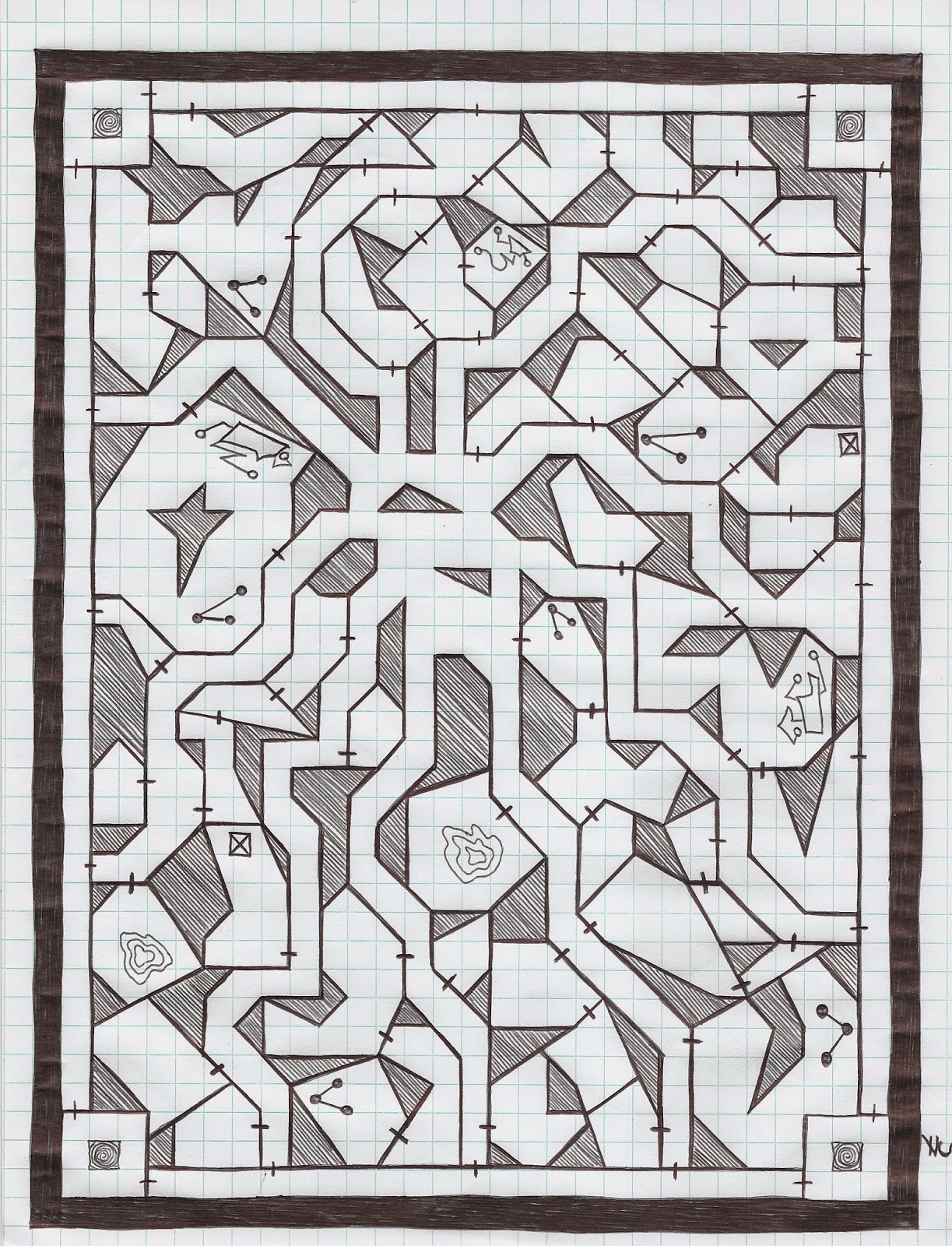 The above dungeon would be a pain in the ass to map as a player.  The weird symbols are most likely some sci-fantasy artifacts. 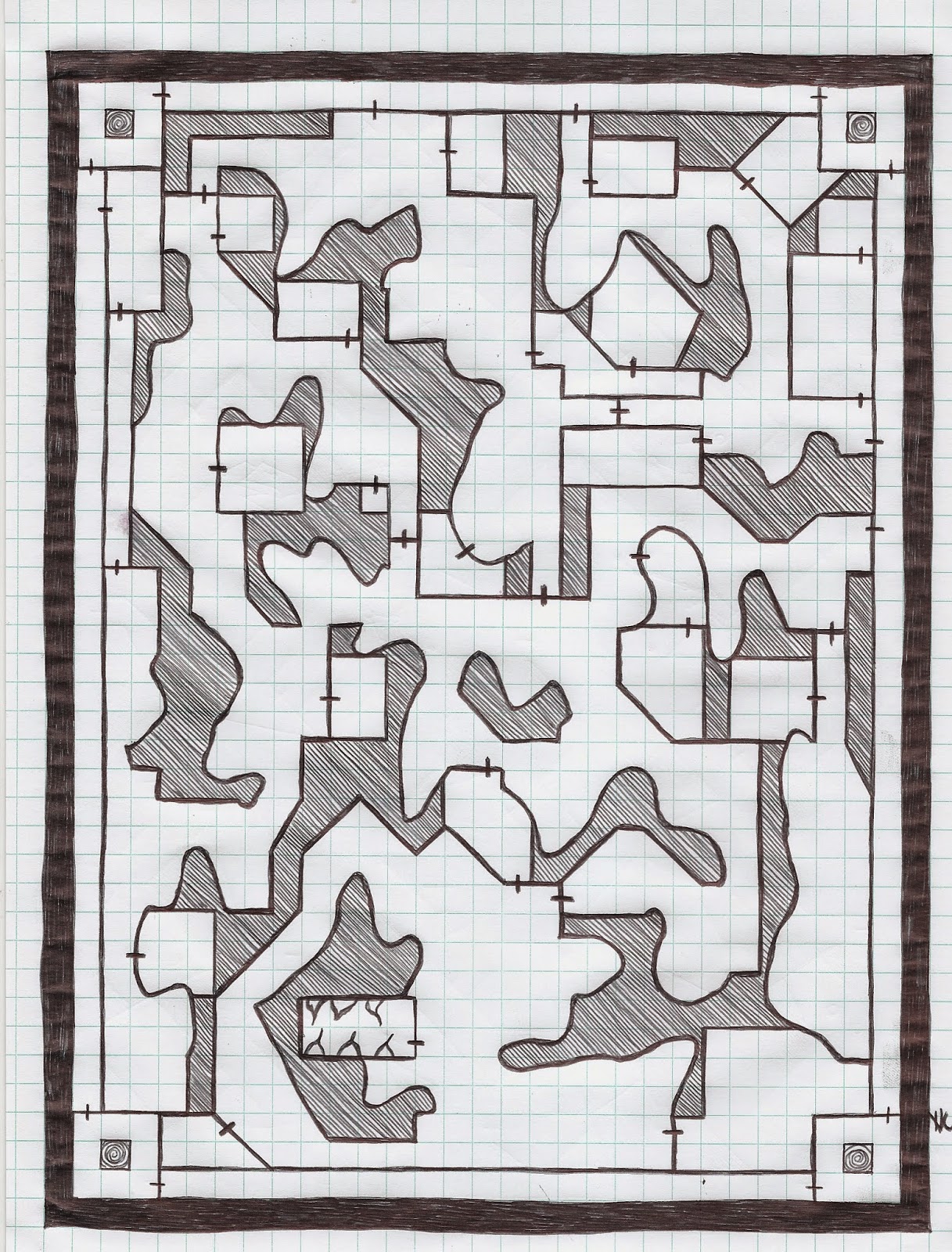 I drew some quick squiggly lines and then put in lines based on the graph paper.

There are spiral stair cases in the four corners that lead from the first level down to the last one.


Posted by SamwiseSevenRPG at 8:59 AM No comments: