Playing in a New AD&D Campaign

The last campaign that I ran was a Basic Fantasy campaign at the library for kids. My son got to play too. That was before the pandemic though. That seems like a lifetime ago...

For the last year or so I've mostly just been posting RPG stuff on MeWe and less so on Facebook. I've been posting a few things on the blog here and reading RPG books when I can get some free time. 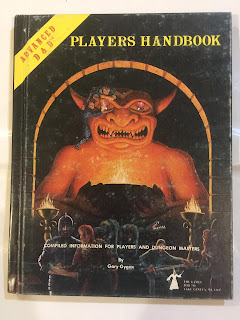 Recently one of my old gaming buddies invited me to a newly formed AD&D face-to-face group. There are just 4 of us total in the group (the DM, myself, and two other platers). I can't tell you how awesome it is to just play again!

The DM hasn't ran or played in a game for over 30 years! So, while he is a bit rusty, he said it's like riding a bike. He's been doing a great job of setting up the local area with NPCs, monster threats, mysteries to solve, and options for us players to choose from.

He's running a hodge-podge system that is mainly first edition AD&D with the non-weapon proficiencies of 2nd, and some ideas from Basic like initiative. He is not too concerned with the letter of the law and I like that loosey-goosey style he has.

As a DM/GM myself I'm really trying not to be That Player who is annoying. So far, so good on that front. I just keep quiet if my GM brain sees what's probably going on before the other players do. Sometimes us old GMs have just spent too many hours behind the screen/curtain. Like I said though, I'm having a blast though. Good times.

I'm playing a Dwarf Cleric named Ulfgar Trollhammer. The Clan was in the setting already so that's where the last name came from. He worships Dumathoin the Dwarven God of Secrets. He's all about revealing the caches of gems and minerals hidden in the ground. So far he's killed some Orcs, Troglodytes, and a Jackalwere (which he skinned and made its head into a sweet helmet). He's gotten to 3rd level after 4 sessions, but the threats have been dangerous and almost deadly. Hehe. The DM was impressed how much we risked, but in the future us players will have to be more careful. Those Troglodytes almost TPK'd us.

I hope life calms down out there enough for you to find a group to play in. Maybe playing online/remotely is the safest bet right now for you. Anyway, I hope you get to chuck some dice in one way or another.

Posted by SamwiseSevenRPG at 8:26 AM 2 comments:

Looking for an RPG Editor? Matt Click Can Help! 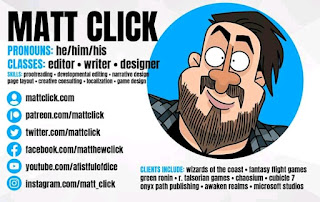 Matt helped me to get my first RPG PDF into shape before I published it. He's all successful now but he's looking for more work. If you have a project that needs some TLC or you just need a good editor, send him a message.

Posted by SamwiseSevenRPG at 4:08 PM No comments: