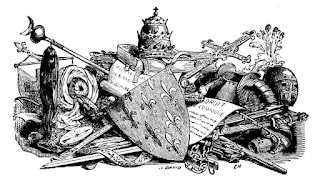 1. A main building in a town or city collapses, killing all inside. A major natural cave system is discovered beneath it.

2. A dying dragon in its death throws crashes into the town square of a city. A statue of an old hero pierces its heart. The dragon then morphs into an old man that looks like the statue.

3. A storm foretold by a prophet 100 years earlier arrives and destroys the land. The prophet is killed by being impalled by shattered tree debris.

4. An army of a Lord who has ignored the King's call for peace are marching to attack another rival Lord.

5. Outlaws who have kidnapped many prisoners already attempt to capture the characters.

6. An enraged four legged animal is haunting the land. It is rumored that is never sleeps and with each victim it grows ever larger.

7. Pilgrims are travelling to a site to either worship at a shrine or set up a new one. They are carrying a holy artifact or bones of someone they considered holy in life.

8. A caravan of refugees are fleeing some natural calamity or battle with hopes of finding a new home.

9. Tax collectors and their bodyguards are handing out fines and collecting unpaid taxes.

10. A herd of animals is being shepherded along on a main road or path.

11. A small group of knights are on a quest and ask for guidance and assistance.

12. Some peasants are moving some crops or hearding animals from one farm to another.

13. Travelling merchants try to sell their wares from their ornate wagons.

14. Ex-lepers claim that they have found a cure to the disease. They appear perfectly healthy but it is only an illusion/glamour that conceals their sickness.

15. An entire congregation was murdered instantly in the middle of a church service.

16. A madman dwells in a cave outside of town who claims to be the founder of an important and ancient settlement. He seems to know details about the past that he shares between his violent and bloody fits.

17. A child who has vivid dreams shares his nightmares with 1D100 others every night, or even during the day if they are napping.

18. Undead are raised in a local cemetery. They were soldiers who were not at rest because they were betrayed by a local magistrate. They will attack that magistrate's town for revenge then fall to dust.

19. A race/species that has attacked a settlement for hundreds of years decides to change tactics. They offer a mountain of wealth to become peaceful settlers in the surrounding lands. Their subterannean homeland is besieged my more powerful creatures.

20. Violent underground pressures force an entire 1D4 levels of a megadungeon up above ground level. It's also now tilted and the levels are uneven.

1. A hardy form of fungi was brought above ground 1 year ago, and its spores have spread the species far and wide, and it's taking over areas once populated by brush and trees.

2. A disease causing blindness in children, pets, and farm animals spreads across the land. Up to 25% of the cases are fatal.

3. A gateway to some distant land or abysmal plane has been opened by a power hungry mage. They died during the ritual. A bloodthirsty mob has emerged from beyond looking for spoils.

4. A farmer has recently found a secret door in his basement to a massive underground lair. A ruined and tortured form of humanity was locked down there a millennia ago by some cruel Wizard-King. They are peaceful unless provoked. They have brought the farmer gifts.

5. A cache of old and deadly weapons has been found and a Lord has given his trusted servants these weapons. They all now think as one as a malevolent spirit in the blades now works patiently to slaughter the Lord and fill his corpse with his own spirit from beyond the grave.

6. Highwaymen ambush the characters. They are trying to gather enough funds to buy a remote and forlorn castle and make it their base of operations.

7. A new ore has been mined in a remote bywater kingdom, and to the nobles it is the latest trend. It is slowly making them sick however as it slowly leaks out a rare form of magic energy that makes living things ill over time.

10. A band of ex-soldiers who fled from the horrors of the battlefield have banded together to thwart nobles from slaughtering the innocent in their wasteful wars. They are called The Sundered Shields.

11. A greedy Lord is kicking peasants out of their homes and slaughtering those who refuse. Some major excavation or building project is planned.

12. Shoeless and shirtless monks wander the land begging for food and shelter and in return they give out blessings, work, and teach those who are illiterate to read.

13. A herd of rare deer, the color of ivory, have been spotted on the outskirts of a local town. Since their arrival the crops grow in abundance, illnesses are non-existent, and all the biryhs have gobe smoothly. They are protected by everyone in the town. Those who slay them are put to death publicly and violently as a warning.

14. Disgruntled townsfolk with torches and pitchforks in hand march on a local official who has gone one step too far.

15. A blue-green comet called The Dragon's Breath fills the night and day sky for 1D4 weeks. Many see it as an omen of change and great upheavel in the days to come.

16. An unlucky coin is mixed in with normal coins that were recently given (or found) by the characters. It changes successes into odd failures and seeks to torment its owner in all ways. It in actuality is a wizard who tried to turn the silver coin into gold and failed.

17. A unique hybrid monstrosity bred in captivity and abused for years by its creator finally killed its cruel master and now wanders the King's hunting grounds and nearby areas.

18. A beautiful meteor storm bombards the world for 1D6 days. Those who find one of the fragments and touch it will mutate and gain a few new abilities or physical qualities.

19. 1D100 preserved corpses have been discovered buried upside down in the king's castle walls. Each one is holding a unique card from a Tarot-like oracle deck, except each one deals with calamity and tragedy.

20. Adventurers find the body of a revered Saint or... God. They bring the entire sarcophagus to a prestigious temple. Miracles and good omens are evident in the surrounding areas.

Posted by SamwiseSevenRPG at 10:38 AM 2 comments: