I wrote this over on Google+.  Figured I would share it here too.

I don't like conflict, never have.  I also suck at standing up for myself, but I'm trying to work on that front.  Seeing friends of mine attacking each other is always disheartening.  I also avoid choosing sides and try to stay as far away from internet drama as possible.  I do prefer those that stick more to gaming chatter by in large.

It seems that I have way more patience for dealing with problematic personalities that others find super annoying.  Some of us have undiagnosed personality disorders I think.  I have anxiety and depression issues, so I'm not above anyone.  I often find myself in the predicament of having two or more friends that despise each other, and yet, I still consider them all my friends.  I'll give you an example.

A younger much more naive version of myself got married when I was 20 (and somehow I'm still married at 38).  At that time I had a pretty decent sized pool of friends from various backgrounds, cliques, groups, etc.  I invited them all to my bachelor party in the mountains (we made dams in the creek, slid down a natural water/rock slide, ate lots of food, and drank generic soda pop).  Yes, I know, I had a boring party by many standards but for me it was mostly just what the doctor ordered.  That park is still my favorite place on Earth.

Roughly one third of my friends left almost as soon as they arrived to this party.  Why did they do that?  They did that because they couldn't stand some of my other friends, and could not bear to hang out with me while they were there.  So their distaste for some of the guests was greater than wanting to hang out with me for one last night before I got married.  It pissed me off then, but I understand their reaction too to a certain degree.  That reaction just isn't one that I use much in my life.

How does this all apply to people that are into RPGs and interacting with them?

*I like to give people the benefit of the doubt.  Maybe they are acting like an asshat today.  There are probably reasons for that, and maybe they should have just stayed away from the keyboard while they were upset or felt like crap, etc.  I don't throw a friendship (or online interaction type person) away for a bad day.  People are people, and we all suck sometimes.  I think people need a bit of forgiveness and leeway.

*If a friend or acquaintance sucks donkey balls all the time, and they are a leech and the relationship with them is nothing but a one way street, sure, now it's time to dump their ass on the curb and move on.  Life is just too short for that kind of draining negativity.

*People have commented that I do respond to trolls and that I shouldn't feed them, yada yada.  Well, trolls are people too (albeit misguided ones that come in several varieties).  I think I've surprised some of them by being nice in response to some asinine nasty comment they made on a blog post or RPG video, or Facebook post or Google+ post.  I've even got a few to apologize (I know, a miracle right)?  Sometimes I'll even agree with them, but spin their comment a bit.  I also like self-deprecating humor, so there is that.

*I don't think I need to win every argument, and to me a friendship or relationship with a person online means more to me than winning.

*Maybe I'm just a dreamer (cue the Beatles) but I do kind of expect people to be nice to each other as a general rule.  My expectations are often not met however, haha.  Still, for myself I do aim to be nice to everyone if possible.  If not, there are blocking features, removing them from circles or friends' lists, etc.

*I know that my personality type / way of dealing with people can piss some people off too.  "Dammit man, get angry or something."  I'm sure it might be healthier to unleash on someone from time to time, but that just isn't my M.O.

If you want to stick around to hear my random thoughts, campaign ideas, opinions about games, etc.  I'll be bere.  If not, good luck to ya and have a good one.

P.S. This was surprisingly hard to write, and I have a sneaking suspicion it is as clear as mud.  I hope you got something out of it.
Posted by SamwiseSevenRPG at 2:06 PM 6 comments: 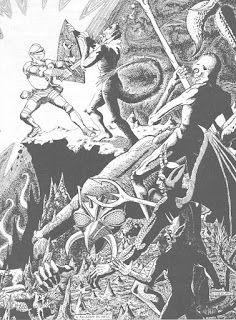 Dead Air, Filling the Silences: I have really been trying not to fill every silence that happens at the table, because I've realized that it is not my job to do so (it is the group's responsibility as a whole).  By letting that dead air just HANG there I have found that players tend to get more proactive and fill it themselves by engaging in dialogue with one another or doing something.Dice Rolling & Randomness: I will only roll dice (or call for a dice roll) when I want a random result.  There will be times when I just say your character succeeds at an action without a roll.  Many times I include descriptive details that would be the result of a roll as well to cut down on the number of times dice are rolled.  IF the dice hit the table however we will be incorporating that outcome (I don't fudge dice).  There will be more randomness in character creation (namely rolling 4D6 dropping the lowest die straight down the stat line) to discourage min-maxing but the rest of character creation is a series of player choices.  Emergent Narrative: While I will be using the rough draft of my Suffering of the Moth Queen adventure, it is more like a current situation and sandbox and I have NO idea how your characters will navigate its challenges or what will happen after they get involved in what is happening.  The story will emerge from play as the characters explore the environment and interact with creatures and NPCs.Exploration and Interaction with the Environment: I think part of an old school game is exploring strange locations, mapping them out, and discovering what lies in those fuzzy un-mapped areas.  Every room will not have an encounter, and everything you encounter will not try to kill you.  Sure, other things WILL be trying to kill you but even then they will be interacting at the characters.  I don't think in-character role-playing needs to end when initiative is rolled.  As a general rule try to listen to the descriptions of things as there are often hints and clues sprinkled in there.Heroic Characters, Not Superheroes: Some of the house rules will aim to reduce the power level of the characters so that a bit more realism is prevalent during play.  Characters will most likely die at some point during the course of the adventure, and that's okay (note that resurrection is an option).  I find that if death is a real possibility for the characters combats have more of an exciting edge to them.  Also, when fights are dangerous I find that players look for other options than just hitting things in the face with swords.  hehe.In-character Role-playing, Not Social Skill Checks: I gutted Charisma and all of the social skills because I want to promote in-character role-playing.  You don't have to be an actor using accents and stuff however.  Just do your best.  It is evident when someone is trying and that is all I can ask for.  Plus, I find bantering back and forth in-character to be one of the things I really enjoy about RPGs.Meaningful Character Decisions: I will not be using any "Quantum Ogres" as you go through the dungeon.  I want to make choice matter.Pro-active Players and Risk Taking: Don't be afraid to think outside of the box to try something new.  All of the answers are not on your character sheet.  If you just sit there your characters won't do anything cool.  That being said, the world that the characters will be exploring is dangerous and being careful at the right moment might save your character's life.  Without risks there are no gains however.  Rulings / Rules as Guidelines: The rules are guidelines and at the end of the day the GM will make a call for a situation where the rules are unclear or too unrealistic and move the game forward with a ruling.  I don't want to fight over the rules during a game session but afterward we can look up the rules that are in question.  The GM is the final arbiter and referee of the rules while the game is going on.  I will try to be fair, and I always like to get feedback so feel free to let me know.Theater of the Mind: I mostly run games in a more theater of the mind approach (aka no miniatures or grids).  In the case of complex combats I might throw out some flat marbles, dice, etc. to represent things though.  Unbalanced Encounters: Everything the characters face will NOT be of an appropriate challenge rating.  Sometimes the best choice is to run like Hell or hide or do some talky-talky.  There should be some clues in the room description to let you know that this thing that you are facing is deadly (like a mountain of skulls, or blood everywhere, or corpses hanging from walls).  Weird & Wonderful: I hope to drench modified fantasy tropes with strange horrific details.  At times I can dip down into dark fantasy.  I look at megadungeons as strange supernatural mythic underworlds where reality's rules need not apply.  They aren't just piles of ruined mortar and stones in my mind.

Posted by SamwiseSevenRPG at 7:55 AM 2 comments: