I have been working on a single level of a megadungeon for about a year or so now.  It took me quite some time to write up all of the room descriptions and then rewrite them... and rewrite them...  I give writers a lot of credit as it was a lot of work.  The adventure is under 40 pages long and this thing has been tough for me to finish.  Thankfully I have a lot of contacts from people that hang out on YouTube that have helped me in the final stages to complete it.

There are plans to put the adventure up on DriveThruRPG when it is all said and done though I have to figure all of that stuff out once the adventure is finished.  Currently my drawings are being colorized and a few of them were inspired from monsters in the AD&D 1st Edition Monster Manual.

The adventure has a bit of a dark tone and I think that is most likely because I have been reading a lot of Lamentations of the Flame Princess adventures over the last year or so.  Well, that and I have a sort of demented sense of humor and a knack for coming up with some bizarre and horrible ideas to include in my RPG sessions.

Even though the adventure is systemless I refer to some common D&D mechanics like saving throws and ability scores.  It shouldn't be hard at all to run the adventure as is with an OSR retro-clone with some work by the GM.

The adventure is going to be called The Lair of Murcanto Salmanocko: A Megadungeon Level.  Sure, it is a fairly long name but I like it.  I currently don't have any plans to write another adventure as this one took forever to draw the art for it, but who knows, maybe I will some day.

A friend of mine is colorizing the images right now since I tend to be a black and white only sort of artist.  Phil's (Felipe1Gojira) YouTube channel is here:
https://www.youtube.com/user/felipe1gojira

Here is a sample of the work that he is currently doing with my images.  This is Murcanto's flesh golem. 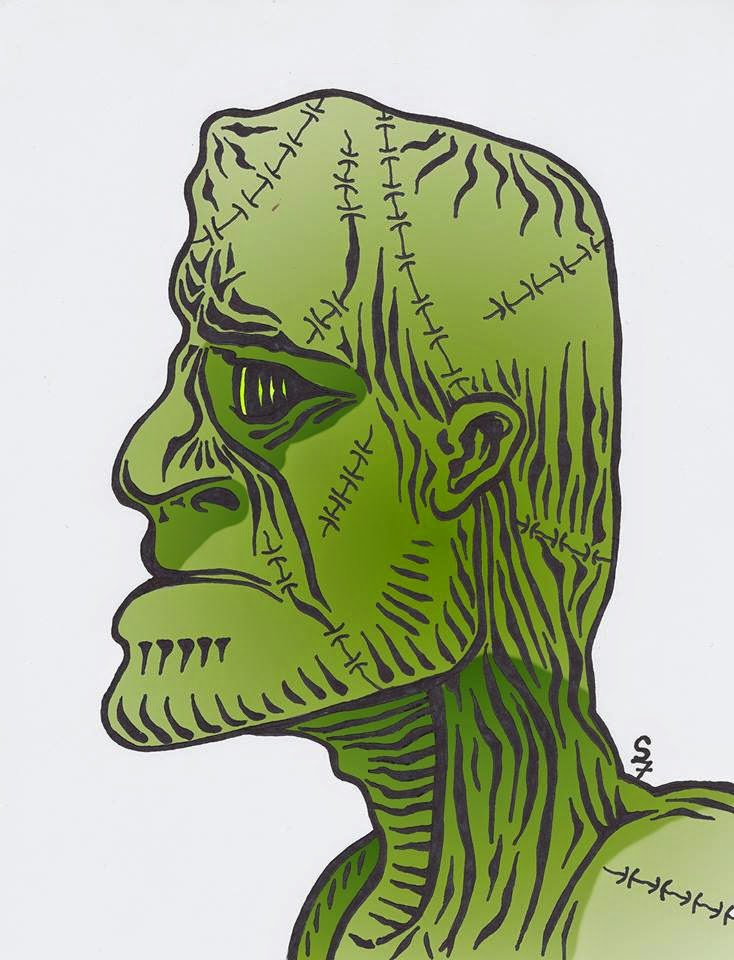 Andre Martinez is working on the layout, and he is the main reason that I have continued on with this project.  I really don't have a high enough Ambition Stat.  Thanks Andre for being my RPG cheerleader to get this finished.  Andre has worked on Within the Ring of Fire RPG and he used to be rather active on YouTube as well. Here is a link to the YouTube channel of the author of WtRoF and to where you can pick up a PDF of it.
https://www.youtube.com/user/woodwwad
http://rpg.drivethrustuff.com/product/118313/Within-the-Ring-of-Fire--Saga-Book

Matt over at AFistfulofDice edited the document and his YouTube channel can be found here:
https://www.youtube.com/user/afistfulofdice

I'll let you all know where to get the adventure when it gets completed.  Thanks.  -Tim
Posted by SamwiseSevenRPG at 10:41 PM