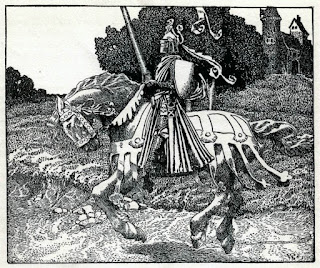 Fighters can use any armor or weapons. At various levels they get a variety of abilities. At first level they can sacrifice a shield to negate all damage from one attack. They get better at opening doors with force at levels 2 and 6. At 3rd level when a fighter kills an enemy they get a free attack on another target in melee range. They can specialize with a weapon at levels 4 and 8 which grants them a +1 bonus and +2 to damage with it. At levels 5 and 10 the fighter gets additional attacks per round. At levels 7 and 9 fighters deal a dice of extra damage each time they hit.