Retiring a Character to be an NPC: AD&D Dwarven Cleric of Dumathoin 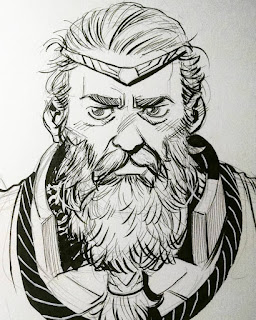 Have you ever retired a character to NPC status due to the events of a campaign or because you just couldn't see them adventuring with other characters one more day?

I did that yesterday in the AD&D game I'm playing in, and it wasn't a planned thing by me, but it just felt right. It surprised me, especially since I just spent a whole lot of energy revamping his spells via the spheres of influence in the back of Tome of Magic. Lol.

After our wizard talked to the Lich that we've been fighting the whole campaign under suspicious and mysterious circumstances without communicating it to the rest of us... my Cleric of Dumathoin was done with him. I was playing my character with the town in mind most of the time, so he feels like a part of the setting now. It was like letting a bird fly free of a cage in some ways.

I gave the player of the wizard character several chances to explain in character, but those responses weren't good enough. My character felt taken for granted as well... so off he went. A direct message from his deity about what was going on was a nail in that relationship too.

I had a blast playing Ulfgar, but it is time to play something else, something a bit more challenging for me. So, I'll be playing a "Thief" with hidden Assassin abilities next. It seems someone with a more flexible moral compass will get along better with the other characters. I've never played an evil character, so here goes nothing.

The other players think I'm nuts to stop playing a 7th level character to start over, but I'm looking forward to trying to keep the new character alive. Hehe. I do like low-level play.

Posted by SamwiseSevenRPG at 10:23 AM