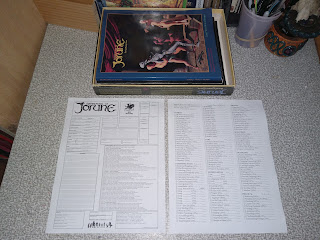 I've seen others tinkering on their own BRP version of the Skyrealms of Jorune setting online... but this one is mine. I've been playtesting it via a campaign I'm running for my son. He likes the sci-fantasy mix. 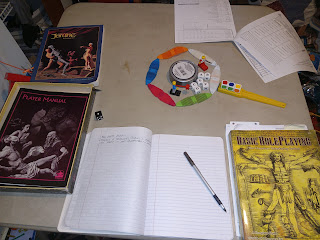 Above my son's character and a few NPCs faced off against some Trarches and Ramians in a Shanthic observatory.

I was tinkering on the dyshas (spells) and trying to figure out the damage and how it all works. I came up with 7 moon skills. If you cast a dysha that uses a certain color you roll to cast on the proper moon skill. I'm basing things more on the 2nd edition box set.

I'll be using Con + Size to determine the characters hit points instead of damage by location.

Edit: I should have started with Stats and Stat Rolls... I'll put those in the next post.

Posted by SamwiseSevenRPG at 8:46 AM