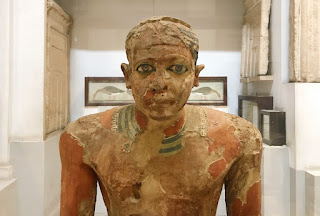 E is for Erlik from the Conan / Hyborian Age setting. He as known as the Flame Lord, and The God of the Yellow Hand of Death. The devout Hrykanians following his tenets founded the Turanian Empire. His teachings are struct but his priests do not follow the devine edicts to the letter of the law.

Erlik is said to have been the first living human but born without a soul or spirit. As a punishment for him trying to create other living creatures he was banushed to the underworld.

The priests teach that the soul must be strengthened through deprivation, hardship, struggle, and toil. Once the soul has departed, the god claims them for his own. All those who draw not breath are his, including the undead.

Terrible knowledge of necromancy is known to Erlik's priests, who are also able to sink bodily into the bowels of the earth.

I tend to like fire deities, but this one gets the bonus of focusing on undead as well. What's not to like? Perhaps only fiery undead pillaging a town would be cooler. *Whoosh*

Posted by SamwiseSevenRPG at 2:13 PM