F is for the Force (Star Wars) #AtoZChallenge2021 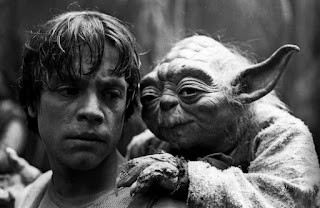 F is for the Force from Star Wars. What can I say about the Force that you haven't heard already? Good question. Hmm...

“The ability to destroy a planet is insignificant next to the power of the Force.”

Even as a child I had a tough time buying that line. I've always thought of the Force Abilities as mostly localized phenomena, like choking a guy, or influencing stormtroopers. There are exceptions of course, like the following quote.

“I felt a great disturbance in the Force...as if millions of voices suddenly cried out in terror, and were suddenly silenced. I fear something terrible has happened.”


There are some abilities that can travel great distances, such as Leia receiving telepathic messages from Luke, and Vader sensing Luke (and vice versa).

These abilities are rather "miraculous" which is why I put this post in my alphabetical series on RPG gods. I've used a generic form of the Force in several fantasy campaigns, and if you think about it there are many similarities to the Dragon in the movie Excalibur that Merlin talks about.

“Remember, A Jedi’s Strength Flows From The Force. But Beware: Anger, Fear, Aggression – The Dark Side, Are They.”

On one hand I like the Good/Evil dichotomy, but I like to think about Grey Jedi who balance the light and dark in some balanced and nuanced way.

“Well, the Force is what gives a Jedi his power. It is an energy field created by all living things. It surrounds us and penetrates us; it binds the galaxy together.”

That part about the living things got tarnished with the Midichlorians in the prequels, so I tend to take a more original trilogy / mystical approach to the Force. In some ways, as in many sci-fi games, these abilities are described as having biological origins in the brain. In my own version of the setting, I would emphasize the mystery and enigma of it without explaining it to death.

“Size matters not. Look at me. Judge me by my size, do you? Hmm? Hmm. And well, you should not. For my ally is the Force, and a powerful ally it is. Life creates it, makes it grow. Its energy surrounds us and binds us. Luminous beings are we, not this crude matter. You must feel the Force around you; here, between you, me, the tree, the rock, everywhere, yes. Even between the land and the ship.”

Here Yoda talks about spirit or soul or something similar; a form of energy that can persist beyond the natural lifespan of a mortal. This is again rather supernatural (cough, Force Ghost, cough).

Star Wars to me is one of the best sci-fantasy settings out there. I know there is a lot of nostalgia and bias in me, and that's... okay. :D

“Remember, the force will be with you, always.”

Posted by SamwiseSevenRPG at 8:48 PM