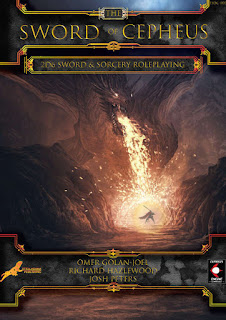 I ran a one-shot of The Sword of Cepheus for my son today. He managed to defeat some bandits (via ambushing them), and followed their trail to their secret hideout.

He had a challenging encounter with a Lizardfolk who had summoned a Fire Elemental. His Theif retainer got unwillingly sacrificed to The Voice in the Flames but that sealed a pact where the bandits were defeated in one fell swoop via an avalanche.

My son seemed shocked by the turn of events, but in a good way. :D. I hope to run more little sessions for him in the future.

I enjoyed running a fantasy game with Traveller mechanics.
Posted by SamwiseSevenRPG at 10:07 AM