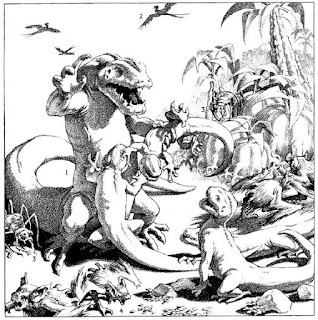 I should have taken more DM notes, and the ones I took I seem to have misplaced...

The group traveled via the Shanthic Cle-Eshta directly to the Muadra & Thivin populated city of Joble. They found themselves in an ancient ruin, that Blogren realized was built by the Shanthas. One of the builders seemed to linger on there in some way, and when he meditated and put some of his Isho into the structure, it revealed its ancient outline, and then later on with more concentration the entire structure as it was originally built was revealed in dimly glowing Isho. In this revealing it seemed to use up the remaining energy of the Shantha and it was then back to being just a dusty ruin once more. Blogren wanted to remain there for awhile, but the rest of the characters, Addacar the Corastin, and the 14 freed Thivins wanted to continue on to the city of Joble.

The group talked to the city guard at one of the main entrances to the city, and they directed the group to go talk to a Thriddle to inquire about starting their path as Tauthers to acquire citizenship. On the way there, there were two Muadra Cajis who were engaged in a deadly battle using their Dyshas upon one another in the center of the street. The group ignored them and moved to their destination.

The characters talked about their exploits, and the Thriddle gave them their own (slightly burned) Chalisks that important members of society could mark when they had performed missions and important tasks. They were told that in the far-off city of Ardoth that they could eventually show these metallic plates there with 20 endorsements that then, and only then, would they achieve citizenship with all of its benefits (like granting Earth-tec to adventurers).

The Thriddle also noticed the taint of Lamorri on Blogren, and Ahte, as well as slight taint on Bruus (who removed most of it by violently shocking his skull last session). Experiments and procedures were performed by the Thriddle on the characters, and eventually the Lamorri sludge from that animated skull was removed and collected for future study. The Thriddle seemed both repulsed and very interested in their findings, and he gave the group some Thriddle history, and how they originally were introduced to the world of Jorune. Canth Lor Snoggis (the Thriddle who had been traveling with the group) was revealed to be a form of Thriddle criminal and folk hero. He was offered lodgings and to stay there in Joble, and he agreed to leave the group and stay there with his fellow Thriddle.

Ahte asked about Lamorri artifacts, and the Thriddle happened to have an odd oblong and flat squarish one in storage. It was given to Ahte who somehow activated it. A heat aura started to expand from him (and his hands were stuck in it) as it charged up. The heat burned the Thriddle's Boccord servant, and they wisely got Ahte outside to a nearby Kerning Bay to see what would happen. Ahte thought he might be destroyed, but once the odd green light covered his body, he was able to unleash the energy on a target. It destroyed the target, the wall behind it, and the tool shed behind that wall in destructive fury. What costs would this Lamorri Box of Death cause? Only time will tell...

The group then went to the Dirty Jurgen (an Illidge establishment of ill repute that dealt mostly in gambling). Titanius found the owner who happened to have Earth-tec and a high stakes game of chance was started. After three hands Titanius was the winner, and an irate Jurgen seemed to hold a slight grudge, but he didn't accost the characters to try to get their lawfully won artifacts. It seemed like the rumors of the Black Box of Death might have influenced a peaceful exit from the establishment...

Both Muadra Cajis (Ahte and Blogren) while arguing with the other characters saw a purple Isho light form in the center of all the group. It seemed to form in response to anger and disagreements between the characters... The Cajis both learned two new Mogren Dysha powers, and the other characters were granted some vague benefits too. The purple "Battle Spirit" between them was a curious thing, and they wondered if they would experience it again in the future.

On the way back to the Bronth Tonista's farm, 5 charging Dharmee (large lizards) tried to make a meal of the characters, but between the human's blaster barrage, the Black Box, Blogren's Dyshas, and the arrows of Bruus and Addacar, the Dharmee were turned quickly into butchered and blistered chunks of lizard meat. They skinned the corpses, and harvested the meat.

They were welcomed with warm fuzzy arms by Tonista, and the group told her about a Durlig Planter that was at the one ruin. They think she will retrieve it with some nearby help from other farmers. They inquired about the Shanthas that they had brought out of stasis, and they had been seen flying in their odd craft North-East to another small town, that just so happened to be Ahte's hometown. The group hopes to go there next, though some of them really want to explore that Warp to the Icy Skyrealm that is in the center of one of Tonista's Hilc fields.

Posted by SamwiseSevenRPG at 10:55 PM