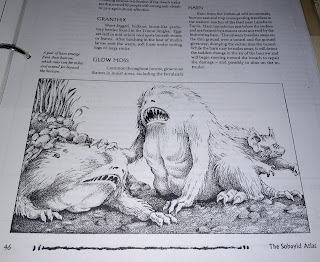 The group rested and relaxed a bit on Tonista’s Durlig & Hilc farm. They told the Bronth owner of the farm where an Earth-Tec Durlig planter was, and she was going to get some local people to go retrieve it. She said she would have to hire on a human as well, so that they could operate the planting device.

The characters headed off toward Ahte’s home town of Dharmery to the North-east of Tonista’s farm. While traveling there Ahte told the group about how Dharmery is ruled by a human-only nobility, and that Boccords and Muadras (as well as any other form of intelligent life) are considered second class citizens. Luxury crops like chocolate and coffee are the town’s main exports.

Bruus noticed an odd section of ground, and avoided it… only to miss another section that was a trap. He fell through the odd plant-based spider web-like fibers, and as he was tangled in it, 4 large furry creatures with sharp teeth (Harns) bit into his flesh with their diseased saliva. He struggled to get free, and tried to fend off his attackers. The group managed to levitate him out of there with a Dysha, but one of the 4 Harns sunk his teeth in deeper and held on. Luckily for Bruus Blogren (the Muadra) cast Flame Touch and yanked the last remaining Harn off of him, and hurled it into one of the other web traps (which then caught on fire). Addacar filled his belly with Harn meat, and he seemed to have no ill effects from them other than a stomach ache from eating too much.

The group cleaned out the rest of the Harns in their tunnel nests, including some humans who had their bodies reduced to disgusting egg incubators. They also freed a Thriddle who was recently captured, and just undergoing the egg implantation process. He was a member of Canth’s (the first Thriddle the characters met) failed skyrealm exploration mission. His name was Salrough, but the characters just called him Sal. Upon further exploration they found some Gems, Gemlinks, and Gemules from previous victims of the Harns. They also found some damaged armor and a few mundane weapons. Blogren collected all of the Harn teeth, but no one else took any other Harn parts.

A letter was also in the refuse that said:

Experiments have gone well. Deliveries should be made in roughly two months time.

Appra (later they learned that this was Appra Dharmery, a noble of the town of Dharmery).

On the way there they saw 10 thin gray-white streaks of light that hurled downward at the downtown sections of the upcoming town on the horizon. As they approached the farming peasants were all hidden in their homes, and scared. No one knew what had happened but they weren’t taking any risks by being outdoors.

The center of town, and scattered around in 10 locations were areas of dark ash destruction. Noble houses, main buildings of wealth, and other vital locations were utterly destroyed, and all life was reduced to ashes in a 20 feet radius around these light drinking black rods buried deep in the ground. Only about a foot of each of them was visible above the ground. Titanius hit one of the rods (after Ahte told him not to) and his arm felt a horrible shock, and the Muadras looking on noticed a color shift in Titanius’ aura, to now having odd brown to it in places (a color that did not exist to their knowledge). Later they would learn that this was the color of the vile Lamorri energy that is the antithesis of Isho and life itself. Blogren levitated the rod out of the ground to reveal that it was 30 meters long. When his Dysha ended, it once again hurled itself into the ground and thereby killing another 20 foot radius of life and Isho around it, and that also hurled the characters violently away from the blast area.

As they discussed what to do, another 10 Lamorri Death Rods blasted into the town from above. Blogren started to feel an intense creeping pain, but Ahte… felt attracted to the power held within the Lamorri tech. The townsfolk mostly fled the debris, as well as Bruus, Titanius, and Blogren, but Ahte remained. He approached slowly, and grabbed hold of one of the Lamorri rods. Instantly, all of the rods hurled themselves upward out of the ground, and Ahte vanished. A huge explosion was seen high above the world where nothing was previously visible, and then a single rod hurled itself back to the ground with Ahte still holding onto it. He seemed to have sustained no damage, but his aura had a darker brown tint to it as the Lamorri energy seemed to be coursing through him. As a result of this, and Titanius’ touching the rod previously… it seems that Ahte can now control Titanius’s left arm. This of course disturbed the group, but it could possibly come in handy later (ba dum tiss). Hehe. The rod that Ahte held crumbled to ash and that ash flew into Ahte’s nose and mouth. It was guessed that Ahte perhaps will gain new powers, and perhaps lose some ability with Isho as a result. Only time will tell...

Posted by SamwiseSevenRPG at 10:45 AM