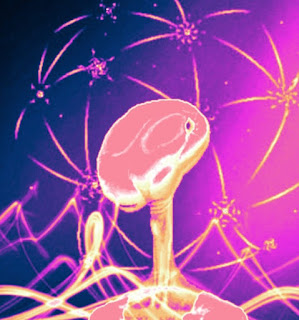 The characters left Tonista's Durlig/Hilc farm to head into Joble to sell their Beagre pelts and to get some cold weather gear to explore the cold Skyrealm where the Thriddle and Cleash came from via a Warp.

On the way there, Ahte and Blogren had a weird sensation, like they had passed over some mystical barrier. Titanius figured out that the odd sensation was in a circular pattern, and he used his Reco Digger to explore below. The Reco Digger returned with an odd purple crystal.

When Titanius touched the crystal, it broke, and a purple energy mist enveloped them and he started being pulled through the sand and dirt straight down. Blogren tried to grab him to stop this weird effect but then he started getting pulled down beneath the ground too.

The circular area with a 60 foot diameter began to levitate and break free from the surrounding ground. It got up to about 20 feet off of the ground before Bruce activated a Boccord ability that let him use the unknown power of his Shanthic Blade, which gave him crude control over the curved structure beneath his feet. Bruce shook off most of the extraneous sand and dirt by maneuvering the floating structure and landing it.

Inside the structure Blogren and Titanious witnessed ancient Shanthas in these organic-looking holding stalls that seemed to preserve some of them in stasis despite their old war wounds.

The Thriddle Canth Lor Snoggis stayed outside to "guard their escape." Ahte and Bruce touched the weird purple outline where the other characters sunk down, and they sunk through the earth in a similar fashion to join them.

The characters explored the structure which seemed like it was a hidden location ages ago. With the purple gem power source removed by the Reco Digger the Shanthic Stasis Stalls ceased to function correctly and the Shanthas begun to wake up.

Titanius and Blogren were testing out a pedastal with flowing metal that shimmered. It turned out to be a teleporting device, a Cle-Eshta that lead to an ancient Shanthic Temple. Blogren went there and returned safely. Titanius went there and explored. Another Cle-Eshta was discovered but it was destroyed from ancient Earth-Tec blaster fire.

The rest of the group talked with the first Red Shantha that woke up. He was severely wounded and they healed him. The group (thanks to Blogren translating for them) learned that these special Shantha soldiers had experimented with a new Purple form of Isho energy, that they translated as "Battle-Spirit." He told them that the characters were his enemies but he felt obliged to let them leave... alive, and he even gave out two Shanthic Daggers as his thanks for reviving them and for the medical aid. The group left willingly through the Cle-Eshta and ended up in the Shanthic Temple.

After some exploration and digging through collapsed doorways, Titanius snuck up and spied some enslaved and chained up Thivins working in a red crystal mine. The red crystals had their volatile nature inverted to be amplifiers of peace and tranquility but the Thivins were being forced to desecrate the temple by destroying and collecting them for their Crugar masters. Titanius used a charge of his blaster to sever the chains and isolate the Crugar from the Thivins with a cave in.
The rest of the group (including the Thriddle) caught up to Titanius and set up an ambush for the 6 Crugars that were digging out the cave in.

As soon as the Crugars cleared the last few rocks away Ahte smashed a crystal that emptied out ALL of the isho in the nearby area from the Crugar and him and Blogren as well. The Crugar did not realize this at first and they kept attempting to hurl Lightning Blast Dyshas at them to no effect.
Blogren smashed some of the purple crystals to regain some much needed Isho, but the weird energy blended in with his (which was noticeable by Ahte, a fellow Caji). This helped him levitate one of the Crugar, while the others shot arrows and slashed at the others. They killed the 5 Crugar, and realized the last one fled.
All of the auras of the characters now contains the swirling unknown Purple Isho.

They gathered up the fallen two-handed Crugar weapons and items, and then chased after the last Crugar. On the way they noticed another Cle-Eshta but did not examine it. They also freed another 6 Thivins from their cell.

The group climbed a badly damaged ladder to the bright surface to see the last Crugar climbing up a rope ladder to a small Ramian crystal ship floating roughly 30 feet on the air.

Titanius shrugged and blasted a vital spot of crystals on the bottom of the ship which started a chain reaction that made the ship shatter and explode. Ramian and Crugar bodies were hurled violently on fire to their deaths as fiery ship chunks fell on top of them.

The group will more than likely talk to the Thivins to figure out where they currently are. Where will they go? What will they do? We shall see. :)
Posted by SamwiseSevenRPG at 8:18 PM