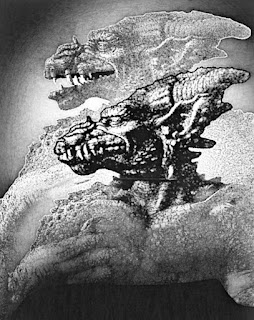 The characters had lots of options to pursue at the start of the session. They determined that they were about a day's travel South of the City of Joble in the Sobay Basin. There were 3 revealed Warps to Skyrealms near to where the Ramian skyship crashed. Our sole human character Titanius wanted to return to see if the Shanthas were getting up to trouble, and they all were worried about Tonista on her Durlig/Hilc farm. The Muadra characters wanted to go to the city of Joble to get cold weather gear, to turn in their Beagre pelts, and get some cold weather gear for the Skyrealm through the Warp at Tonista's farm. They instead chose instead to completely explore the Crugar crystal mines below near to the hidden Shanthic Temple.

A warping of their perceptions was noticed down a long hallway with jagged soil/crystal walls. One of the Muadras (Blogren) explored it, and realized that the reality of the cave was different from what they were seeing. At the most intense spot of the visual effect, he dug the earthen floor, and there he found a buried skull that was dense and heavy and about four times the size of a human skull. It had crystals for eyes, and sharp teeth that were drilled into its skull and jaw bone. It looked like the creature had those gem teeth implanted during life. He must have had an intense intimidating grin when it was alive... eek!

Elsewhere (because the party split up) Ahte (sp?) found a mutated corpse of a Crugar and weird green mist covered his body when he was looking through its items. Nothing *seemed* to happen right away. (Evil GM Chuckle). He found a green gem headband that seemed to help him with Green Dyshas.

Titanius found an electrified metal door, and he tried to ground the energy with a sword and that seemed to only help a little.

Back at the odd skull, Blogren touched it and resisted its animate sludge that resided inside of it and its effects. Ahte however was hit right in the face with the sludge, and it went into his body through his eyes, ears, etc. Later this same effect happened to Blogren and Bruce the Boccord. Bruce then shocked the sludge out of his own skull via the electricity of the door. It was one of those "I think... that would actually work" moments. Haha.

The skull started to float, and the human blasted it, but it managed to reflect the energy beam back at him! This would have killed Titanius but Blogren managed to use some healing herbs quickly before then. Phew!

The skull animated, levitated, and then resisted being destroyed by Bruce's Shanthic Blade, and stole it, and another character's sword to use in its phantom limbs. The skull used an area effect that hurt everyone. Eventually, the characters were able to destroy it enough with a powerful Dysha hurled at it from the Thriddle Canth and their weapons.

Behind the door was an imprisoned Corastin named Addacar. Blogren got in the way of one of the cyrstal energy beams keeping the Corastin there, and almost got killed. They disabled the prison and kept the 6 blue gems that were the source of the effect. Addacar agreed to serve them, and said that he was Blood Bonded (or they were bonded with him, it was a bit unclear), and sprayed them in the face and chest with his own blood after performing a ritual with its arms and elbows. Addacar was told about the Crugar corpses in the mines, and he went and collected some gruesome trophies from them.

The group explored more, picked up some history books about the Crugar and Human Energy War, and found a Cle-Eshta that linked to the City of Joble.

The group also found a dark Energy Cube that seemed like it powered some large ancient Earth-Tec device, perhaps a vehicle or a heavy piece of machinery. The Energy Cube was used by the Crugar as a sacrificial altar. The group thought that many miners had died on it due to the decayed bones around it. Titanius thinks it somehow generates electric power (perhaps via Zero-Point means) and stores it.

In four boxes they found Ramian herbs, namely Shirm-eh, which they were told by the Thriddle was illegal in human society, but a food supplement that the Ramians need to survive. The group stashed them in case they ever needed to bribe some Ramians...

With Addacar, the Energy Cube, the characters, and the 14 rescued Thivin miners, the group traveled through the Cle-Eshta to the City of Joble.

Posted by SamwiseSevenRPG at 1:49 PM