Hello. Here are some write ups from my Birthright solo campaign. Enjoy. 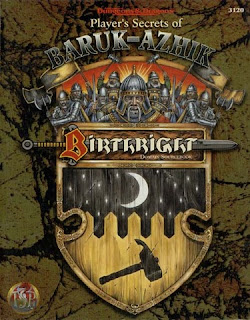 I just started a solo campaign in the AD&D 2nd edition Birthright RPG setting. I'm ruling the Dwarven kingdom of Baruk-Azhik. I'm used to the video game and this is my first time actually using my physical books/box sets.

I feel like I'm getting a few things wrong, but I'm sure as I go along I'll get better at it.

After Turn 1, a mysterious meteor with a new metal was recovered, many roads were built, an alliance with Coeranys to the West was sealed, and the Dwarves have gone to war with the Elves of The Sielwode and taken 3 territories from them. 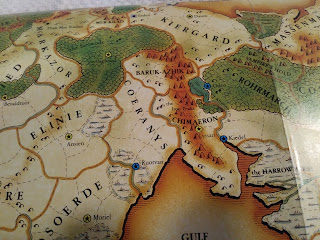 I didn't spend a lot of Regency the first turn so I burnt a whole lot this turn.

A major landslide happened in Rivenrock, but we shored it up with support walls and newly planted tree saplings.

I've set the taxes low for the newly acquired Sielwode provinces to try to sway their loyalty.

It's going to take time to create and increase holdings there. I plan on doing more of that after the war with the Elves ends.

I used the Investiture option to fully take over 4 foreign guilds on Baruk-Azhik soil but that really chewed through a lot of Regency. The Points East Trading Guild has been wiped out.

I casted Blight on a province of Sielwode to erode support for their Regent.

Sielwode attacked but their armies were destroyed. Kiergard attacked as well but with heavy losses the Dwarves prevailed.

We created a law holding in one of the Sielwood provinces.

Sielwode summoned a Legion of the Dead and hurled them at the Dwarves. We suffered more heavy losses but the Dwarves were victorious.

Declared war on Sielwode and took over 2 more provinces. Only one Dwarf army was slain as the Elves were overwhelmed.

Chimaeron and Coeranys keep messing with each other. This time Chimaeron took a Law holding.

Kiergard created a magical device that emulates a magical Source. 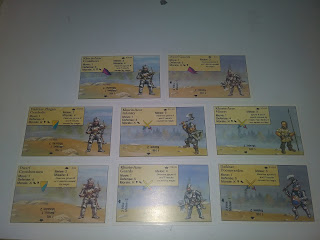 I increased taxes in the Sielwode provinces to pay for the increased costs of new troops. The Elf Wars have been deadly. The fields of carnage have drank deeply of Dwarven blood.

The extra income from some more holdings was a nice little bonus this turn. I decided that the Elves mostly invested in Magical Sources and that their land is raw and mostly wild. The Birthright book doesn't describe what holdings Sielwode has.

Most of the actions were mustering armies and moving troops to the front.

My son helps me play from time to time so he is using Diirk Watershold, the Spymaster of the guilds of the Dwarf kingdom. He wanted to take control of some more guild holdings so we wiped out the Maesil Shippers who had 3 guilds in Dwarf territory. He was also granted a title due to his loyalty to the realm.

We also improvised and made up a Transfer Funds action to give our ally Coeranys 10 gold bars.

We finished up by building more roads along with a statue commemorating the defeat of the Elves and their Undead minions (they cast a Realm spell in the last turn).

Our funds got dangerously low (6GB) due to heavy mustering of troops. They were needed though.

Declared War on Sielwode and after some tough battles we utterly destroyed the Elves and laid siege to their capital city (which I assumed had a fortified castle). Luckily the dead require no maintenance costs... Eek.

At this point I think I need to make up a spreadsheet or just a fancy DIY graph paper sheet to keep track of all of the improvements and tax levels in each province.

My son was so excited that we took over the whole forest.

Create Law Holding in one of the Sielwode provinces. It's a nice Law vs. Chaos thing going on. The Dwarves are bringing some order to these Northern wilds... :D

Sielwode attacked from their fortified castle in their capital city but they were not able to break the siege.

Kiergard declared war on us and captured one of the Sielwode provinces! Curses!

We declared war on Kiergard and recaptured the Sielwode province that was stolen. This is beginning to feel like a land war in Asia. :D

Coeranys ruled and improved a province.

Sielwode attempted to break the siege but failed. 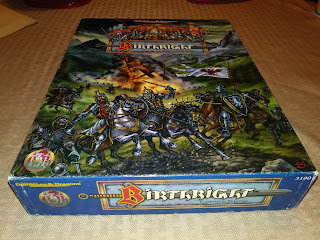 The tired road crews demand some time off due to the extensive amount of roads they have been building.

**Regency.** I really need to increase my Regency by one point in one of the future turns. 24+38= 62 Regency Points

**Taxation.** I was taxing the Elven provinces before I used Investiture by mistake. I'll fix that this turn. 63 Gold Bars total.

1. Decree to give the road crews time off. No new roads this Turn.

2-10. Investitures to lay claim to the Sielwode provinces as my own. Burned a lot of Regency to make that possible... Since I'm a Cleric these are Free Actions.

15. Move Troops to the borders.

I started the long process of Creating Law Holdings in Sielwode (3 of them). I'll have to use the Rule action later to increase them in level.

Lieutenant Domain Action (Diirk): Create Guild Holding in a Sielwode province. It's nice to get an extra Domain Action each turn.

Coeranys uses Investiture twice on Holdings of Chimaeron and succeeds once. The regent went on an Adventure as well.

Chimaeron Ruled and increased a Magical Source, cast Demagogue as a Realm Spell, and Declated War on Coeranys. They took a province from them. As Coeranys' ally I really need to head south and take out the Chimera...

Elinie (new neighbor) made a few Decrees and went on an Adventure.

Markazor (new neighbor) Declared War but was repelled from our lands. Looks like I'll need to keep a few more troops on the Northern borders.

Mur-Kilad Ruled, Declared War on Kiergard and expanded its Dwarven borders and Agitated in Kiergard.

Kiergard Created a Temple, Fortified along its border, and Declared War on Mur-Kilad but failed to repel the Dwarves.

Posted by SamwiseSevenRPG at 7:33 PM