I find myself tinkering on Labyrinth Lord Advanced Edition Companion races today for my homebrewed ice world of Marth. I also added in a few extra special abilities from AD&D. There are several sub-species of elves on Marth, and their descriptions are down below the main LL AEC details. 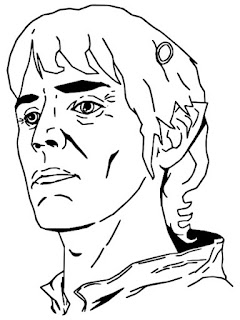 Ability Modifiers: See the sub-races below.

Description: Elves are slim fey beings with pointed ears, and narrow faces. They typically weigh about 120 to 160 pounds and are between 5 to 5 1/2 feet tall. Elves are very talented fighters, users of magic, and they have an innate connection to the natural world. The life span of these creatures is a dozen centuries long which they often use to persue artistic pastimes.

*Elves are immune to charm and sleep spells of all sorts. They also only need to sleep for 4 hours for a full night's rest.

*Because of their connection to nature, elves are immune to the paralysis ghouls can inflict.

*When employing either a bow of any sort other than a crossbow, or a short or long sword, elven characters gain a bonus of +1 to attack rolls.

Note: Elves and the other races do not have darkvision.

Elves may select from the following classes, with the indicated level limits.

Note: the Druid replaces the Cleric in the setting of Marth.

*Elves receive a better dice range for hearing noises. For example, 1st level elven thieves hear noises on a 1-3, and at 9th level it is 1-5. Hear noise may never be better than 1-5.

The following abilities are in addition to the information above, or modify the above abilities.

(They survive only by drinking the blood of animals and other humanoids).

*Keen Eyes: When blood elves are actively searching to detect hidden and secret doors they are successful with a roll of 1-2 on 1d6.

*Track Like a Ranger: They can track things when out in the wilderness exactly like a Ranger can, but this does not apply to tracking creatures in underground environments. They also have no movement penalty over ice and snow.

*Backstabbers: When using daggers and shortswords they deal +2 damage.

*Poison Drinker: Immune to All Poisons.

*Deadly Silence: If alone and not in metal armor (or if well in advance of a party) a shadow elf character moves so silently that he or she will surprise monsters 66% (d6, 1 through 4) of the time.

(All are born blind without eyes)

*Blindsight: They can sense all foes within 20 feet as a sighted creature would. Beyond that range, they treat all targets as having total concealment.

*The Bond is Strong: They get a free loyal familiar: Even if they are not a Magic-User. They can only see through the eyes of their familar as they have no eyes themselves. They can also bond with one willing humanoid and see through their eyes as well.

*Born of Magic: They only need 4 hours of meditation or rest to regain their spells. They can cast one extra spell per day for every spell level that they can cast. Example: +1 1st level, +1 2nd level, etc.

Posted by SamwiseSevenRPG at 6:14 PM