I find myself tinkering on Labyrinth Lord Advanced Edition Companion races today for my homebrewed ice world of Marth. I also added in a few extra special abilities from AD&D. There are several sub-species of dwarves on Marth, and their descriptions are down below the main LL AEC details. 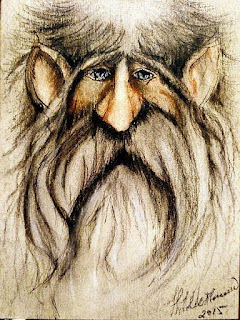 Ability Modifiers: See the sub-races below.

Dwarves are a particularly hardy and stubborn people. They value high quality craftsmanship, precious metals and stones, and live deep underground. Although only 4 or so feet tall, they weigh no less than 150 pounds due to their stocky muscular build.

Dwarves typically band together in clans which are not mutually exclusive or hostile but they are highly competitive. They have a reputation for having surly attitudes, and are particularly gruff with elves. Rocky hills and mountains are the favorite abode of these sturdy creatures, and their clanholds far below the surface of the world are breathtaking to behold. If they survive their toils in the mountains and the bloodlust of battle they can live to roughly 350 to 400 years old.

*Due to their short height, dwarves cannot use most two-handed weapons or longbows. However, they can use any other weapons or armor allowed by their class.

*No matter what class they choose dwarves are proficient with all hammers, and spears.

*Due to their great hatred of goblins, giants, ogres, orcs, and trolls, all dwarves gain a bonus of +1 on their attack dice rolls to hit these opponents.

*When dwarves are in melee with giants, ogres, trolls and yetis, these monsters must deduct 4 from their dice rolls to hit their dwarven opponents due to the size and skill of the latter in combatting these large creatures.

*From their experience underground, dwarves have a 2 in 6 (1-2 on 1d6) chance of detecting traps, false walls, hidden construction, or noticing if passages are sloped. Dwarves must be actively searching for these abilities to function.

*In addition to languages known based on the character's intelligence, a dwarf character will also speak: the common tongue, dwarf, elven, goblin, neanderthal, orc, and uldra.

P.S. Note that dwarves and the other races do not have darkvision.

Dwarves are hardy beings, resistant to magic and poison, and as such they receive bonuses to defend against these effects. In addition, their small size grants them a bonus to finding cover and avoiding breath attacks.

Dwarves may select from the following classes, with the indicated level limits.

Note: the Druid replaces the Cleric in the setting of Marth.

The following abilities are in addition to the information above, or modify the above abilities.

*Firestarter: All melee attacks with metal weapons deal +1D6 extra fire damage. Wooden weapons will be destroyed by fire after one use by them. Their skin is also warm to the touch, and they can raise the temperature in confined sealed spaces as a small fire would.

*Soul Forge: Any spell that is cast by a fire dwarf that deals fire damage is treated as if it were cast by a magic-user one level higher.

*One with the Stone Father: They can hide with a 90% chance if they stand completely motionless next to any type of rock or stone of roughly the same size as the character. This ability works even if they are in plain sight. They can also walk though a number of feet of stone equal to their character level. Example: a 6th level gray dwarf can walk though 6 feet of stone.

Posted by SamwiseSevenRPG at 2:16 PM