I find myself tinkering on Labyrinth Lord Advanced Edition Companion races lately for my homebrewed ice world of Marth. I tweaked the gnome and halfling races, and I also added in a few uldra abilities from various AD&D sources like Dragon Magazine. I eliminated the ice dwarf, gnome, and halfling from the setting of Marth. The uldra here replace all three. 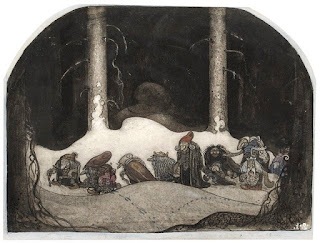 It is said that uldras are distant ancestors of the elves and dwarves, and share many of their idiosyncrasies. They have a wide range of appearances, and average about 3 1/2 feet tall. They tend to be very slender, averaging 80 pounds. Uldras generally dwell in hills or on mountainsides, and they often wander free over the barren tundra. Their habitations often overlap with elves, and these two races are typically very friendly, if not familial, to each other. Uldras are renowned for their ability to tame wolves and wild dogs, and most of them travel with one of these domesticated animals.

*Uldras are small and may not use large and two-handed weapons, but they may use weapon and armor as indicated by class. Also their armor class rating is one better due to their size and innate knack for avoiding danger.

*Uldras are immune to cold damage, but they take 200% damage from fire.

*They have a 2 in 6 (1-2 on 1d6) chance of detecting dangerous or unsafe natural terrain, and finding wilderness snares and traps. Uldras must be actively searching for these abilities to function.

*They always know true North, and those who try to track them find no tracks, even in deep snow, as their feet leave no trace.

*Uldras have an uncanny ability to disappear in the frozen wilderness. In bushes or other outdoor cover (like snow), they can hide with a 90% ability.

*Uldras speak the common tongue, dwarvish, elvish, uldra, wolfen, and yeti. They can also communicate in basic fundamental ways with most natural animals.

*Optional Cantrips: If you are using cantrip spells in your game they can cast a number of them per day equal to their level.

*Note that uldras and the other races do not have darkvision.

Uldras are resistant to poison and paralysis and as such they receive bonuses to defend against these effects. In addition, their small size grants them a bonus to finding cover and avoiding danger.

Uldras may select from the following classes, with the indicated level limits.

*Note that in Marth the Druid replaces the Cleric.

Posted by SamwiseSevenRPG at 9:24 PM