I find myself tinkering on Labyrinth Lord Advanced Edition Companion races lately for my homebrewed ice world of Marth. I've always been a fan of werewolf / humanoid wolf races in D&D. They are somewhat based on the Palladium wolfen and I picture them having a quasi-Buddhist and shamanistic culture. 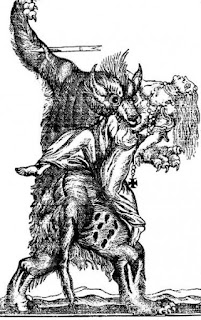 Wolfen are covered in thick warm fur. They typically weigh about 185 pounds and are between 5 ½ to 6 feet tall. Though they tend to be peaceful friendly people, they defend their territory and families with their lives. Many wolfen meditate on the open tundra, listening for guiding wisdom on the colf wind.

*Wolfen can use any weapon granted to them by class, but they are limited to natural armor made from materials like leather and hide.

*Wolfen have excellent hearing. They hear noise as if they were a thief of the same level but with a +1 bonus.

*They can track as well as a ranger can due to their strong sense of smell.

*In addition to normal melee attacks wolfen get an extra free bite attack. The attack roll is modified by their DEX modifier. It deals 1D4 damage.

• +4 save versus breath attacks

• +1 save versus spells or spell-like devices

Wolfen may select from the following classes, with the indicated level limits.

Posted by SamwiseSevenRPG at 12:02 PM